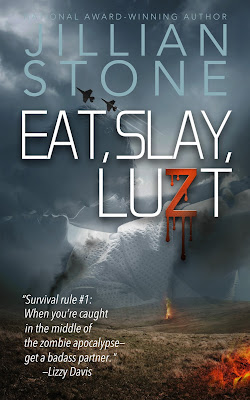 Survival tip #1:
When you’re caught in the middle of the zombie apocalypse, get a badass partner. The zombie apocalypse is on, and Lizzy Davis is determined to survive any way she can. As a surgeon, she’s used to saving lives; not cutting into the basal ganglia to make sure the patient stays dead. When the refugee camp is overrun by zombie hordes, Lizzy manages to escape only to run into Black Hawk pilot Chris Oakley in the middle of the Syrian Desert. Lizzy and Chris fight off zombie attacks as they make their way toward a joint military air base northeast of Kirkuk. Just one problem, they’ll have to pass through the drone-patrolled DMZ— Dead Meat Zone. To get there, they form uneasy alliances with French-Arab commandos and a black ops interrogator who’s slowly rotting before their eyes. Along the way, Lizzy and Chris manage to find time for each other—the sizzling red-hot lovemaking kind of time. And who knows? They might have a chance at love if they live long enough.
Warning: Features red hot to erotic love scenes.

He rested the gun on his knee and pulled the bandana off his face. Jeezus, of course, he'd be dusty, grimy and great looking. “Water?” he croaked.  Z growls gurgled up from the rotten pool of stench surrounding us. Incapacitated biters crawled at the rate of about one meter per hour. But at this exact moment, the newly arrived armed stranger concerned me more than the undead.  I studied the man hunkered down in the sand. A male survivor in good health could be worse than a horde of zombies. Men raped women like me—more than once––then they ate all your food. Worst of all, they wouldn’t hesitate to pimp you out for a meal, ammo, or gasoline. Like I said, worse than a shitload of zombies. I scanned the raised bank that bordered the road. The silhouette of something lean, mean, and fast rested on a kickstand. The zombie slayer’s dust cloud-maker. And my ticket out of here. I unsnapped the plastic travel bottle from my utility belt and handed over the water. He didn’t drink. He guzzled.  “Hey, leave some for me.” He released the water bottle with a gasp. “Got more?” I narrowed my gaze. “Got food?” He hesitated long enough to be manufacturing a lie. “In the saddle bag on my bike.”“There’s a couple of gallons in the truck.” I nodded toward the transport vehicle behind me. “I’ll trade you a share of my water for a share of your food.”The ends of his mouth curled upward, and he ogled my thighs as high as the boy shorts allowed. Pretty sure he was thinking about a different kind of trade. I met his gaze and held it. “Deal?” His attention shifted to my truck. He could grab both gallons and make a run for it. I squinted. “Don’t even try it.” His cute lip curl turned cynical. “Awww. She doesn’t trust me.” He rose and took long strides toward the transport. Midway, he stopped to shoot a crawler in the back of the neck. One of the most annoying things about killing zombies is the having to kill them over and over.
Cursing under my breath, I raced ahead and beat him to the truck. I guarded the door and watched his simple, unhurried style. One by one he made sure the crawlers were dead. He removed his helmet and scratched his head. He was tall, a bit over six feet with nice hair––short and scruffy. Hard to tell exactly what shade of brown in the moonlight. He slung the M4 under his shoulder and approached the truck slowly. That gaze of his caused tingles in placesI didn’t want to think about right now.I did a quick evaluation of my situation. Out of gas in the middle of the Syrian desert––bad luck. Woke up to a pod of biters surrounding the truck––welcome to my bad town. Running into this zombie slayer? For now, it was safe to assume that every badass inch of his badass dick was trouble.
For a FREE two chapter read visit
http://www.jillianstone.com/free-chapter-

Multi-published, national award-winning author, Jillian Stone is on a three year quest to write all the books (in different genres) she’s always wanted to write before she gets forever labeled as a historical romance writer. Jillian lives in Highland, California and is currently writing a shapeshifter tale WOLF, INTERRUPTED, which recently won the FF&P On The Far Side award in the paranormal category. 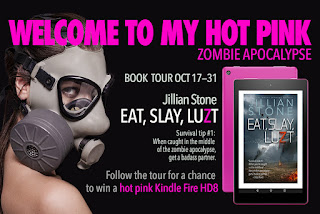