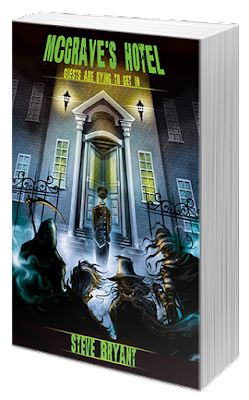 
It’s 1936, and nearly twelve-year-old JAMES ELLIOTT is a bellhop at McGrave’s Hotel, there a year since the night his parents died while on a spy mission into Nazi Germany.

EXCERPT
Victor Lesley held his hand up to shield his eyes from the flashes, smiling his light-up-Broadway smile. He had Clark Gable good looks, with big shoulders, wavy black hair, and a movie-star mustache. He wore a black tuxedo, and his long black cape furled behind him. The ladies with him sported matching red dresses, and they each had blond hair like the actress Mae West. One was chewing gum.
“Mr. Lesley,” one of the reporters shouted. “Do you plan to shave off your mustache for this role?” “Despite all the hearts it will break, I’m afraid the mustache must go,” the star answered. “It might interfere with biting pretty necks.” The crowd laughed.
“How do you plan to make your Dracula different from Bela Lugosi’s?” another asked.
“Mine will be younger and handsomer,” Mr. Lesley said to more laughs. “Will you make Count Dracula a sympathetic character?” “I hope to bring some humanity to a bloodsucking serial killer, to raise his popularity. I want the audience to both cheer and tremble when I’m on stage, to mourn when they drive a stake through my heart.”
A few ladies in the lobby swooned at the mention of that handsome chest being staked.
“New York is full of beautiful women. Do you plan to marry during your run in town?”
The girls in the red dresses pouted at the thought. “Now that would be cruel.
I couldn’t do that to my fans.” “Who are the dames?”
There was a murmuring of consent. All the reporters seemed interested in that answer. The ladies in the red dresses were stunning.Mr. Lesley gave each of the girls an appreciative once-over. “This one is the president of my fan club, and this one is my agent,” he replied. “Or wait, is it the other way around?”
The men laughed at the actor’s lack of familiarity with his companions.
At this moment, it was time for Miss Charles to begin her evening fortune-telling stint in the Boneyard Club. She had joined James when the crowd gathered, one more pair of pretty eyes among the gawkers. “Time for me to scoot,” she whispered to James.
“Too bad. He’s awfully handsome.” Miss Charles edged slowly around the outskirts of the crowd, but she failed to escape notice. Victor Lesley had a sharp eye for beautiful women. “Say now, who is this pretty creature?” All eyes turned toward her.
Several cameras flashed in her direction. 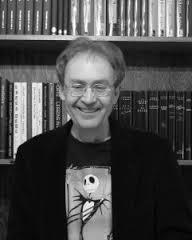