Review For HOT AND BADGERED by Shelly Laurenston-* * * * * Plus Deleted Scene 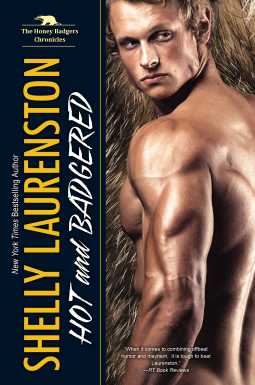 
Series: The Honey Badgers #1
Author: Shelly Laurenston
Genre: Paranormal Romance, Shifters
Rating: * * * * *
Publishers: Kensington
(Mar 28, 2018)
Paperback: 432 pages
ISBN: 978-1496714343
FTC Disclosure: ARC provided by the publisher via Netgalley
Copy provided for the purpose of providing an honest review.
This does not affect my opinion of this book.

It’s not every day that a beautiful naked woman falls out of the sky and lands face-first on grizzly shifter Berg Dunn’s hotel balcony. Definitely they don’t usually hop up and demand his best gun. Berg gives the lady a grizzly-sized t-shirt and his cell phone, too, just on style points. And then she’s gone, taking his XXXL heart with her. By the time he figures out she’s a honey badger shifter, it’s too late. Honey badgers are survivors. Brutal, vicious, ill-tempered survivors. Or maybe Charlie Taylor-MacKilligan is just pissed that her useless father is trying to get them all killed again, and won’t even tell her how. Protecting her little sisters has always been her job, and she’s not about to let some pesky giant grizzly protection specialist with a network of every shifter in Manhattan get in her way. Wait. He’s trying to help? Why would he want to do that? He’s cute enough that she just might let him tag along—that is, if he can keep up ...

One of the funnest reads I've enjoyed so far this year. I love a good paranormal romance and when the author can entertain you with laughter too, that's worthy of another star! Though this book centers mostly around Charlie MacKilligan, it's definitely as much about her sisters and her love for them.
Laurenstein infuses her characters with the animal traits of their shifter animal and they are above awesome and fascinating. This book had a lot of characters in it that I'm sure were from her earlier Pride series (which I have not read but will definitely dig out now) but it in no way lessened my enjoyment of this fabulous cast of shifter characters.

A Deleted Scene from Hot and Badgered

Posted by Lisa Richards/alterlisa at 10:58 PM No comments:

Elley the Book Otter: March 2018 New Release Giveaway Hop!: First off, CONGRATULATIONS to the winners of my February new Release Giveaway. I was feeling magnanimous this morning, so I decided to pick...
Posted by Lisa Richards/alterlisa at 9:21 PM No comments: