Emma Day and her two cousins, Gretchen and Penelope, are uninterested in their debutante lives. All the boring balls, tiresome curtsying and polite conversation leave much to be desired. Then a girl is found dead, frost clinging to her lifeless body, and the murder is traced to Emma. As their world is turned upside down, Emma discovers more about herself and her cousins, from her connection to the murders to the secrets of her family legacy. Now the girls must embrace their true Lovegrove inheritance in order to stop the chaos, even if that means risking their lives. Dangerously handsome Cormac Fairfax wants to help Emma - but, with secrets of his own to hide, can she trust him? The first book in a deliciously dark new trilogy. Perfect for fans of Cassandra Clare and Ruth Warburton.

Posted by Lisa Richards/alterlisa at 11:23 PM No comments: 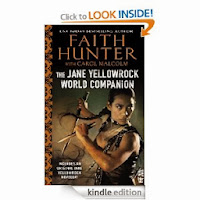 Jane Yellowrock is a shapeshifting skinwalker who means bad news for the undead. Now, she’s back and better than ever, as USA Today bestselling author Faith Hunter gives readers an in-depth glimpse at Jane’s world…plus an all-new Jane Yellowrock novella!
The gritty, sexy, and thrilling New Orleans of the Jane Yellowrock novels is about to be exposed in a whole new way. Filled with brand new, original content, this guide is a must-have for any fan.*Delve into the history of the characters in the series, including the vampire clans.*Get better acquainted with Jane’s inner Beast with her in-depth guide to humanity.*Relive all the action with an essential timeline of Jane’s exploits as a vampire slayer and a comprehensive glossary of terms.*Experience Jane’s latest thrilling adventure in an all-new Jane Yellowrock novella.Plus, includes an exclusive sneak peek of the next Jane Yellowrock novel!

Read more »
Posted by Lisa Richards/alterlisa at 9:22 PM No comments: 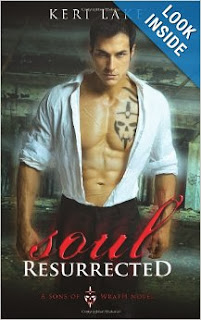 As Wrath’s fiercest son, Logan carries the scars of fifty years spent in the most dreaded prison of the underworld, for a sin he’d kill to keep secret. Enduring decades of gruesome torture has left Logan feared by and detached from others, until a female Alexi’s blood resurrects his soul from death and, with it, the pleasures he’s been denied for so long. Plagued by shame of her own, Calla is drawn to the ruthless demon, Logan, whose insatiable craving for her touch rouses buried passions and, for once, leaves her feeling desired. A dark and dangerous evil has been reawakened, however, and when Calla is drawn too close to its breeding grounds, Logan vows to summon the violence of Wrath in order to keep her safe. First, though, Calla must save him from a past riddled with deceit and corruption … but only if she can accept the chilling consequences of unearthing his vilest skeleton.

Keri Lake is a married mother of two living in Michigan. By day, she tries to make use of the degrees she's earned in science. By night, she writes paranormal romance, urban fantasy and likes to craft the occasional tragic love story. Though novels tend to be her focus, she also writes short stories and flash fiction whenever distraction manages to suck her in to the Land of Shiny Things.
When she isn't toiling away on plots and protagonists, she enjoys reading, music and travel. If she could create mystical powers for herself, she'd have the ability to flash to anywhere in the world. And if she could flash to anywhere in the world at this very moment, she'd be staring at the ocean from her adirondack chair on the shores of North Carolina.
Like her on Facebook: http://www.facebook.com/kerilakeauthor
Follow on Twitter: http://www.twitter.com/kerilake

Read more »
Posted by Lisa Richards/alterlisa at 9:09 PM No comments:

The Order of the Black Swan is a serial saga including My Familiar Stranger, The Witch’s Dream, A Summoner’s Tale, Moonlight, Gathering Storm, and NEVER BEFORE RELEASED Book 6, A Tale of Two Kingdoms.
Once upon a time a girl lost everything familiar. She escaped death by being forced into an experiment that left her in another world where modern day knights, elves, vampires, werewolves, witches, demons and fae became her allies, friends and family. She discovered a place where adventure intersects fairytales, where honor is more than an ideal, and she learned that love can find you in the strangest places, when you’re least expecting it, even when you’re far, far from home. This is the story of Elora Laiken’s strange and wonderful journey. It is also the story of those whose lives she touches along the way.
If you love romance, paranormal, science fiction, fantasy, urban fantasy, contemporary, this series is right for you. 17+
The entire box set (523,000 words) will be available for $0.99 through Saturday, December 14th and then it will revert to regular price of $18.99.

Read more »
Posted by Lisa Richards/alterlisa at 6:44 PM No comments: