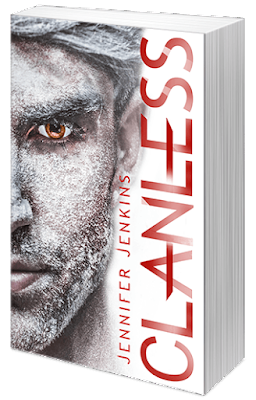 Striker Gryphon has lost his position of honor among the Ram, and is now a hunted man. A traitor.
Zo, the object of his affection, was murdered by members of his former clan. To honor her memory, he journeys to the highly secretive Raven “Nest” to warn strangers of their impending demise—though it could cost him more than just his pride.
He doesn’t know that Zo is very much alive and in another part of the region assisting Nameless refugees over a mountain swarming with wild men known as “Clanless.”
As each struggle to make sense of what their lives have become, they fight and claw to reach the Allied Camp, their last hope in bringing peace to the region.
But the road back to one another is treacherous and uncertain. And freedom will come with a price.

The World of NAMELESS by Jennifer Jenkins


Thank you so much for having me on the blog!

CLANLESS is set in a mountainous region similar to Vancouver, Canada, where an impressive mountain range sits right up against the ocean.  All of the clans in the Nameless series were inspired by one of my favorite cultures in history.
Most of the first book (NAMELESS) takes place inside the walls of Ram’s Gate in a society very similar to that of Ancient Sparta. History buffs will not miss the brutal training methods inspired by the Spartan Agoge System as well as systematic starvation, obsession with a warrior’s shield, and phalanx warfare.
The Raven Clan, which steals the show in CLANLESS was inspired by the spiritually and resourcefulness of various Native American cultures. People in the Raven Clan live in giant Red Wood trees which they actually worship. Also featured in CLANLESS are the Kodiak Clan which were inspired by several Polynesian cultures.

This diverse mix of cultures was intended to form a hotbed of prejudice and clashing viewpoints. It also creates some nice conflict for Zo and Gryphon, the two main characters of the story.

I hope this provides a little glimpse into the world of the Nameless Series! Thank you for hosting me!

Four clans have been at war for centuries: the Kodiak, the Raven, the Wolf and the Ram. Through brutal war tactics, the Ram have dominated the region, inflicting death and destruction on their neighbors.

Seventeen-year-old Zo is a Wolf and a Healer who volunteers to infiltrate the Ram as a spy on behalf of the allied clans. She offers herself as a Ram slave, joining the people who are called the “nameless.” Hers is a suicide mission – Zo’s despair after losing her parents in a Ram raid has left her seeking both revenge and an end to her own misery. But after her younger sister follows her into Rams Gate, Zo must find a way to survive her dangerous mission and keep her sister safe.

What she doesn’t expect to find is the friendship of a young Ram whose life she saves, the confusing feelings she develops for a Ram soldier, and an underground nameless insurrection. Zo learns that revenge, loyalty and love are more complicated than she ever imagined in the first installment of this two-book series.

With her degree in History and Secondary Education, Jennifer had every intention of teaching teens to love George Washington and appreciate the finer points of ancient battle stratagem. (Seriously, she’s obsessed with ancient warfare.) However, life had different plans in store when the writing began. As a proud member of Writers Cubed, and a co-founder of the Teen Author Boot Camp, she feels blessed to be able to fulfill both her ambition to work with teens as well as write
Young Adult fiction.
Jennifer has three children who are experts at naming her characters, one loving, supportive husband, a dog with little-man syndrome, and three chickens (of whom she is secretly afraid).
Visit her online at jajenkins.com