Spotlight For Morgaine Le Fay and the Viking by Kimbra Kasch 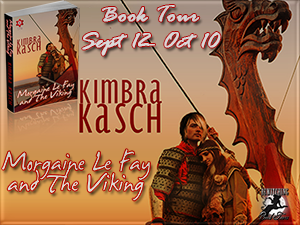 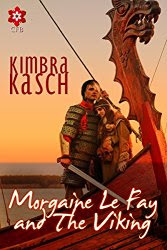 Travel across oceans, continents and countries to discover the story of legendary Viking hero, Holger Danske, and his magical romance with King Arthur’s half-sister in Morgaine Le Fay and the Viking. This is the story of two warriors who never thought they’d find love, especially on the battlefield, yet standing poised against each other Morgaine and Holger face an attraction more powerful than any sword, stronger than any warrior and more magical than all the powers of Merlin.

THREE reasons to read a Viking Romance:1) Ragnar; 2) Lagertha; and 3) Rollo. But seriously, during the dark ages, the Vikings were more than merely heathen marauders. In truth, they were brave explorers. Men and women who took the original Captain’s Oath, vowing to explore strange new worlds, to seek out new life and new civilizations, to boldly go where no man (or woman) had gone before. They were not the pillagers that the British portrayed them to be but people searching for new lands and new civilizations and along the way, they faced gripping family sagas that questioned more than their strength, agility and patience. These journeys brought into question alliances and loyal friendships, while testing their faith. And, there was nothing more important than family relationships. If a Viking couldn’t count on his family to help him survive, he perished. But it wasn’t only the men, these warriors were women as well as men, who stood side by side on the battlefield. Perhaps that is the reason and the truth behind the tales of the Valkyrie and Valhalla, which still haunt the stories of the Vikings.
MORGAINE LE FAY AND THE VIKING is one such tale of the extraordinary lives and epic adventures of two people: Holger Danske and Morgaine LeFey. And Holger Danske was not the first Danish Prince to appear on the printed page or to share a well-known castle as his home. Hamlet’s story is set in the same structure that stands on the sound between Denmark and Sweden. Holger’s home is in Kronborg Castle, known to most English speaking people as Hamlet’s Castle. It was there, inside this Castle that I first was introduced to Holger Danske and the legends surrounding his iconic life. He was a warrior, a Prince destined to become King of all the Norse lands during the time of King Arthur and the Knights of the Round table. I found it odd that everyone had heard of King Arthur and his magical sword, Excalibur, which he received from the Lade of the Lake (a Norse Goddess) who had also given such a sword to Holger Danske. Holger’s sword was named “Cortana”, and was made from the same metal and magic as Excalibur. Yet no one I talked to outside of Denmark had ever heard of Holger or his sword.
And, even more interesting was the fact that Holger and the Vikings invaded England, yet somehow, even as enemies, Holger and King Arthur’s half-sister, Morgaine LeFey, were able to share a forbidden love. Theirs was a romance that threatened two kingdoms. MORGAINE LE FAY AND THE VIKING is the secret Denmark never shares...until now. Morgaine and Holger faced an attraction more powerful than any sword, stronger than any warrior and more magical than all the powers of Merlin. Kimbra Kasch is a romance writer who grew up in a family with 9 kids and only 1 TV. So instead of fighting with her brothers and sisters about which shows to watch, she’d spend her days reading and, later, writing, which explains why she loved books so much. Kimbra’s favorite romance novels are The Hunger Games, the Divergent Series and, yes, even the Twilight books. She loves something with a hint of danger and/or paranormal.
You can find her pinning on pinterest: Or tweeting: And sharing photos on Instagram: Goodreads: And read more about her here: http://kimbrakasch.com/You can friend her on facebook: Or stop by Amazon and check out a few of her other books:

Amazon  or Barnes and Noble.
a Rafflecopter giveaway

Thanks for hostessing me.