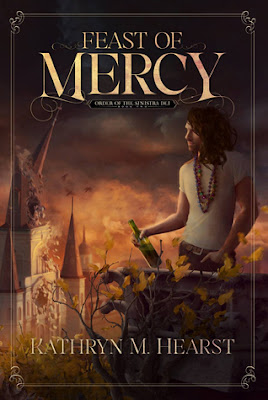 An ancient feud. A threat from the Vatican. Two lovers caught in the middle.
Nick never wanted to live forever, and he certainly didn’t want to join the Order of the Sinistra Dei. Unfortunately, before he’s able to get used to the idea of immortality, the High Judge from the Vatican arrives in New Orleans to investigate the strange events of Fat Tuesday. If Nick doesn’t play his cards right, his forever could be a whole lot shorter.   Marin, a relatively new immortal, is forced to serve as assistant to the High Judge while he investigates the alleged crimes of those she holds most dear. She’ll do what she has to do to protect her clutch. However, her efforts bring her closer to facing the executioner’s blade.   As their world spins out of control, Marin and Nick struggle to reconcile past hurts and hold onto their budding relationship. New enemies, new abilities, and new desires threaten to tear them apart. It isn’t long before they realize love can’t heal all.   Loving someone means you want the best for them...but what happens when what’s best isn’t you?   Feast of Mercy is the second book of the Order of the Sinistra Dei series, an Urban Fantasy/Paranormal Romance like no other.
If you like mysterious supernatural creatures, conflict-ridden romance and a lot of heat, then you’ll love this series.

Short Excerpt:
Nick expected sounds from her—moans, maybe a scream or two. What he didn’t expect was for her to bolt upright and let out a blood curdling scream. Déjà-fucking-vu.
“Get out,” Marin shouted.
For a brief terrifying second, Nick thought she spoke to him, then a male voice spoke from the door.
“Marin, I require your services,” a man said from behind him.
Nick covered her body with his unsure of what else to do. He didn’t recognize the voice, though he detected a European accent. Anyone who called her by name would have recognized him, even with his face buried between her legs. It had to be Lysander.When the door clicked shut, he hopped off.
“Who was that?”
“The High Judge. He’s practically a priest. A freaking priest saw my boobs.”
Marin scrambled off the couch in search of her clothes.
“He’s not a priest. Worse.”
Nick laughed deep in his gut. If looks could kill, he’d be stone cold dead, for keeps this time.
"I’m sorry. Do you think he recognized me?”
“Where is my bra, dammit?”
She pulled her jeans on commando style. Nick handed her the scrap of lace she called panties.
“Where are we going?”
“You aren’t going anywhere. You’re going to hide here until he’s gone, then go back to Gia’s. I need to find out what the hell he wants.”
She snatched her bra from the edge of the desk and rushed it on. Nick ran his hand through his hair.
“Shit. This is bad.”
“Call Gia.”
“I will.”
“Now.”
Marin slipped out the door. Gia’s phone rang until he thought it would go to voicemail.
“Hey, Nick.”
“Gia, the High Judge came looking for Marin."
“Where? Did he see you?”
“The bar.”
Nick’s stomach clenched.
“I don’t know if he saw me.”
“Did he say why he wanted Marin?”
“No, but you need to be careful. Nicholai and Serena are still in town. If he comes to the townhouse, Nicholai doesn’t need to be the one to answer the door.”
“Shit, hang on.”
She spoke with someone. “Okay, where are you now?”
“I’m still upstairs in the office, he barged in and caught us…um…making up. I didn’t get a look at him.” Kathryn M. Hearst is a southern girl with a love of the dark and strange. She has been a storyteller her entire life, as a child, she took people watching to new heights by creating back stories of complete strangers. Besides writing, she has a passion for shoes, vintage clothing, antique British cars, music, musicians and all things musical (including theater). Kate lives in central Florida with her chocolate lab, Jolene; and two rescue pups, Jagger and Roxanne. She is a self-proclaimed nerd, raising a nerdling. The Order of the Sinistra Dei is her first series and includes titles, Feast of the Epiphany and Feast of Mercy. Kate's novel, The Spirit Tree, won a publishing contract with Kindle Press through the Kindle Scout contest. Her short stories have been published in various anthologies. http://facebook.com/kathrynmhearst
http://twitter.com/kathrynmhearst
https://www.amazon.com/Kathryn-M.-Hearst/e/B017S8Z088
https://www.goodreads.com/author/show/13847103
http://www.kathrynmhearst.com/ 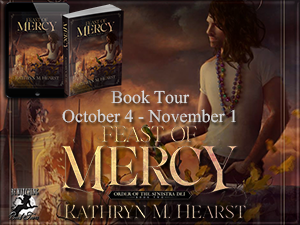