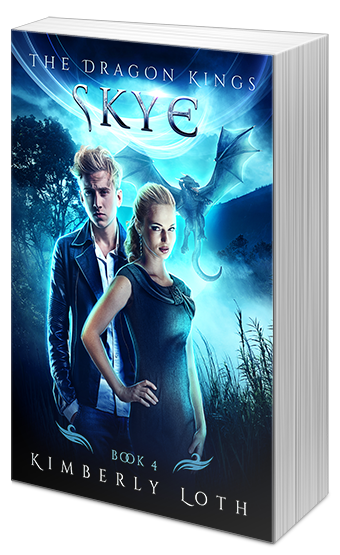 Rowan Winters is completely in love. With a shifter dragon.
But the drop-dead gorgeous Skye only thinks of Rowan as her best friend. But when she turns up in his room in the middle of the night in tears, he yearns to do whatever he can to help her. Even if that means running away and letting his family think he’s dead.
Skye’s entire world turns upside down the day her scales turns black. She knows she’ll have to flee to find answers. But she wasn’t planning on Rowan coming too. She just wanted to say goodbye. He is so eager to help that she can’t leave him behind even though she knows she’ll never be able to love him in return.
Together, they fight off murderous dragons and uncover sinister plans. But can they find the answers Skye so desperately seeks? And can Rowan sacrifice everything he knows to win her heart?


She dove for the house before she talked herself out of it. She wanted to feel human again, if only for a minute.
OTHER BOOKS IN THE SERIES:

Kimberly Loth can’t decide where she wants to settle down. She’s lived in Michigan, Illinois, Missouri, Utah, California, Oregon, and South Carolina. She finally decided to make the leap and leave the U.S. behind for a few years. Currently, she lives in Cairo, Egypt with her husband and two kids.
She is a high school math teacher by day (please don’t hold that against her) and YA author by night. She loves romantic movies, chocolate, roses, and crazy adventures. Kissed is her first novel.