RACE THE DARKNESS by Abbie Roads-Review 5* 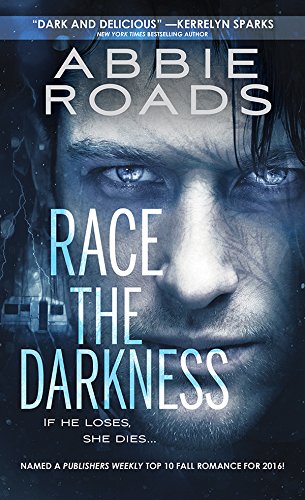 IF HE LOSES, SHE DIESHer voice haunts his thoughts; her whispers fill his daysBut when he discovers the woman of his dreams is realHe'll race the clock to save her before she's lost to him forever
Scarred by lightning, burdened with a power that gives him no peace, criminal investigator Xander Stone struggles to maintain his sanity against the voice that haunts him day and night—the voice of a woman begging him to save her.
Isleen Walker has long since given up hope of escape from the nightmare of captivity and torture that is draining her life, her mind, and her soul. Except...there is the man in her feverish dreams, a strangely beautiful man who beckons her to freedom. And when he comes, if he comes, it will take all their combined fury and faith to overcome a madman bent on fulfilling a deadly prophecy.
Named a Publishers Weekly Top 10 Fall Romance for 2016!
Fatal Dreams Duology:Race the Darkness (Book 1)Hunt the Dawn (Book 2) 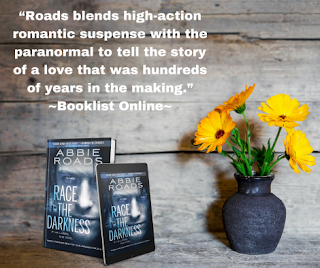 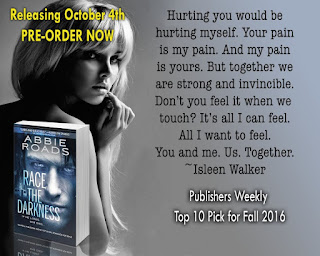 First off, I gotta admit, there's nothing I enjoy more than a romantic suspense. When you mix in some paranormal, I'm in hog heaven. This book is very fast paced and once started, you will not want to put it down. I pretty much read it straight through in less than a day. It was just one of those reads that when you put it down you were still thinking about it so what the heck, you might as well immerse yourself and enjoy it.
By the way, Abbie, this is a fabulous cover that really gives you a feel for the story. I was constantly sucked right back into the story just by looking at the cover, which is amazing for me as I usually don't get all ga-ga about the covers of a book. So guys, get a print copy rather than the e-book so you don't miss this!
It starts out with you feeling that Isleen is pretty much a victim but that quickly changed as I realized the strength of this amazing woman. I loved the way it started, with bits of scenes that didn't really connect but once they did WOW! I don't want to say much about the story as I don't want to ruin it but this is a writer that I believe will be around for a long time keeping me up till the wee hours unable to sleep until I know what happens next in her stories.
I was lucky enough to win an ARC of this fabulous book and can't thank the author enough for the hours of enjoyment reading and then later just thinking about this book. I love when a book  stays in your mind long after you've finished it and am already looking forward to
Hunt the Dawn which will be out early December. This would make a fabulous early Christmas gift, family. Just saying-- as I add to my wishlist.
Posted by Lisa Richards/alterlisa at 9:00 AM