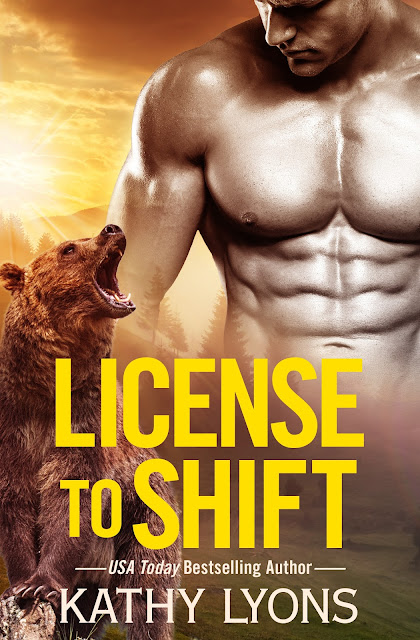 Mark, closest friend to the Gladwin clan's Maximus, is dangerously close to going feral. Which means his inner beast will devour the man. But Mark refuses to go down without a fight. Especially when his mentor's daughter shows up on his doorstep looking for her father's missing research journals.
Julie has had a thing for Mark ever since he rejected her all those years ago in high school-and, of course, after that one hot-and-heavy night they shared. Now, her father is in the hospital and it looks like someone has stolen his top-secret research journals. Together, she and Mark track them down...and Julie is in for the surprise of her life.

EXCERPT
Julie Simon has stopped by Mark’s home because she believes he’s got her father’s journals. He’s sound asleep when she hangs on the doorbell and he answers the door before fully waking. Turns out, he forgot to put on clothes. (Grizzy bear shifters are pretty casual about nudity, especially in the privacy of their own homes)

OMG! OMG! OMG! OMG!
Julie Simon was not a prude. She enjoyed a finely honed male body as much as any woman. But when said finely honed man answered his door stark naked and proceeded to look at her like she was the answer to his prayers, well, then, her libido kicked into overdrive. Especially when that look turned into hunger and his already thick cock stiffened into a staff that aimed unerringly at her.
She was not a prude, but hell, this was sexually at its most raw. And she apparently liked raw.
Who knew? All her boyfriends up to now had been friendly, flaky men who spoke in full sentences and never, ever growled. And yet one hairy, horny grunt from this guy and her nipples tightened while everything else went liquid.
Not a prude, then. Apparently, she fell more into the slut category because if he made a move on her right then, she wasn’t exactly sure what she’d do to stop him. First of all, he looked like he could overpower her in a heartbeat. Second, the moment he’d offered her his mocha latte, her knees had gone weak and her lust spiked. When the hell had she developed a caveman fetish?
Insane!
But she wasn’t a beast to be ruled by her hormones. And she certainly wasn’t going to jump a near stranger, no matter how ripped his abs or how much he stared at her. Good lord, she’d never been the center of such focused attention. Need rippled off those sculpted pecs, it vibrated in the air between his broad shoulders and her tight breasts, and it seemed like he wanted her so badly it was hard for him to form words. But how was that possible? All he’d done was answer the door…naked.
She took a breath, startled—but not surprised—to find it thick with musk. His? Hers? Who knew?
Get a grip!
She momentarily flashed on what she could grip and struggled to restrain a near-hysterical laugh. She was not a woman who thought things like that. Not in the usual course of the day. So she closed her eyes and lifted her mocha to her lips. Damn, he made a great cup of coffee. The honey added just the right amount of sweet.
Focus on the essentials: caffeine and sugar.
That’s when he spoke. Two words: “no” and “leave.” Well, that was par for the course from the men in her life. They’d act one way, then say the opposite. Get her revved, then disappear. Give her a mocha and then order her to leave. All he needed to do now was invite her to move in then break up with her and he’d be just like her ex.
But unlike what she’d done with her ex, she refused to leave. Her father needed his help, and so she would be stubborn. At least until she got a fuller explanation from him. One that included two-syllable words.
“So,” she ventured when the silence stretched too long between them, “do you remember me?” 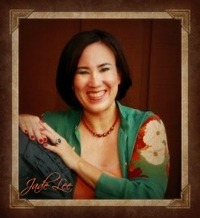 Kathy Lyons is the wild, adventurous half of USA TODAY bestselling author Jade Lee. A lover of all things fantastical, Kathy spent much of her childhood in Narnia, Middle Earth, Amber, and Earthsea, just to name a few.  There is nothing she adores more than turning an ordinary day into something magical, which is what happens all the time in her books. Winner of several industry awards including the Prism-Best of the Best, Romantic Times Reviewer's Choice, and Fresh Fiction's Steamiest Read, Kathy has published over fifty romance novels, and she's just getting started. Check out her latest news at KathyLyons.com.

Giveaway:
Enter to win a copy of License to Shift:
http://bit.ly/2dBVJTG
Posted by Lisa Richards/alterlisa at 3:00 AM