One man, one muse, one romance to save the world 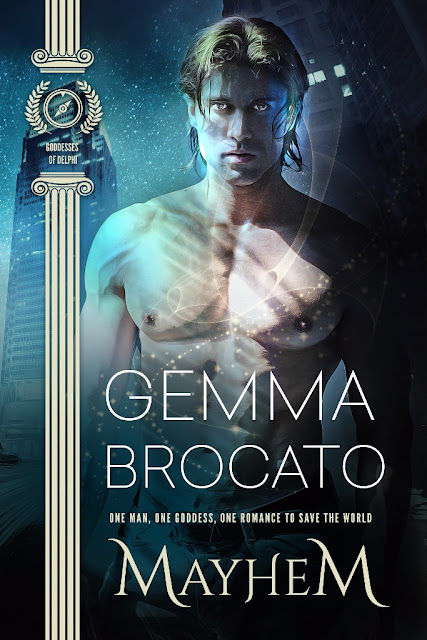 A freak solar flare plunges Nia Thanos, Muse of Astronomy, into an evil immortal’s attempt at a hostile take over of Olympus Enterprises. Her jobs—save the family business while rescuing the world from pandemonium. To eliminate the menace she must convince one mortal man to believe in the magic of what if. ‘Doubting Thomas’ Wilde hosts a television program aimed at busting myths. But when Nia confesses to being a Muse, it’s one myth he can’t bust, or believe. His refusal to help leaves Nia to face the challenge on her own. Riots, looting, and general anarchy are minor problems compared to what’s coming if the balance of power shifts on Olympus. Nia’s undeniable attraction to Thomas wreaks havoc on her heart and threatens her ability to secure the safety of humankind. Nia finds herself fighting to persuade the one man she can’t live without to help save the world.

Excerpt
She paused by the art deco entryway and glared at the bird. “You’ll be seeing your sister, Tyranny, very soon.” The bird cackled back at her, as if to say bullshit.
Nia checked with Barry, who had been the overnight tech. Atlas had been a genius at masking the moon’s new position. Barry never mentioned a change in orbit. Nia fidgeted as she scanned reports from their world-wide network of labs and observatories. No one else had noticed the shift either. But the illusion of normalcy couldn’t last long. And soon, mortals would be affected by change. There’d be no way to hide the reason once the lunacy began.
An email had been waiting for her from the International Space Agency. It didn’t surprise her to receive their request for a presentation detailing Friday’s eruption. While she worked to create a PowerPoint slide show with images from the Helios’ solar dynamic technology, the door to her office remained open. She’d been working on the display for ninety minutes when a knock on the doorjamb distracted her.
Nia’s mouth went dry at the sight of Thomas standing confidently in her doorway. If she thought he looked good on camera, real life was a gazillion times better.
“Good morning.” His deep bass voice stroked her senses the same way his gaze stroked her face. Slow. Sexy.
After spending the day watching his TV program, to have him appear in the flesh twisted desire in her belly. Her cheeks heated. “Morning.”
His piercing green-eyed stare made her think he knew she’d spent her overnight hours thinking about him. A smile spread across his mouth. He strode three steps into her office.
He extended his hand and when she took it a burst of sensual fire spread from his palm to hers. She had to force herself to release her grip. “Won’t you have a seat? How may I help you?”
“I wanted to stop by to thank you again for being so kind to Hailey. You really made an impression.” The corners of his mouth tilted up in a quicksilver smile. The kind of grin a woman could happily drown in.
“She’s a nice girl. Quite mature for an eight-year-old.” Dying to know the girl’s story, Nia nudged Thomas to share. She opted for a completely silent command over muttering. She already knew he could hear those thoughts.
He cocked his head to the side. “She is that. I’ve been raising her since my brother and his wife died a couple of years ago. It’s been difficult for her. Kindness like yours makes an impact on a child. And the uncle trying to raise her. Some days, I find myself completely out of my depth.”
Relieved, she drew a breath. So far, so good. This time, Nia opted for a verbal request instead of the mental version to encourage him to finish the story. “May I ask what happened? To her parents?” Any history he could share might help her confirm her suspicion that he was the man to help her.
Rubbing a fist over his breastbone, as if the memory pained him, he spoke. “They’d gone Christmas shopping. Just a casual trip, a date really. They’d left Hailey with a sitter, thank God, and had planned to make an afternoon of it. They were in the mall food court when the terrorist’s bomb exploded.” Thomas blinked away the sorrow in his eyes. “A radical faction that routinely spouts hatred claimed responsibility. Pursuit of unity and brotherhood idiosyncrasies they espouse only served to destroy. It made me lose faith in humans’ ability to love one another. Beyond familial love, that is.”
Bingo! Thomas was the man Pierus had mentioned. Rather than feeling jubilant, Nia felt slightly panicked. How was she supposed to convince this man goodness existed? It wasn’t like the challenge came with a road map. And what about the second part of the prediction—that an innocent life hung in the balance. Dear goddess, was that Hailey?

More from the Goddesses of Delphi series!
Out now: Tyranny
Available at: Amazon
Free on Kindle Unlimited till Nov 9th!! 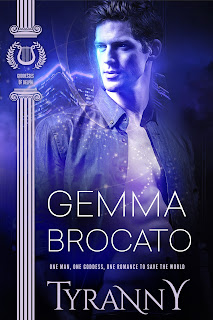