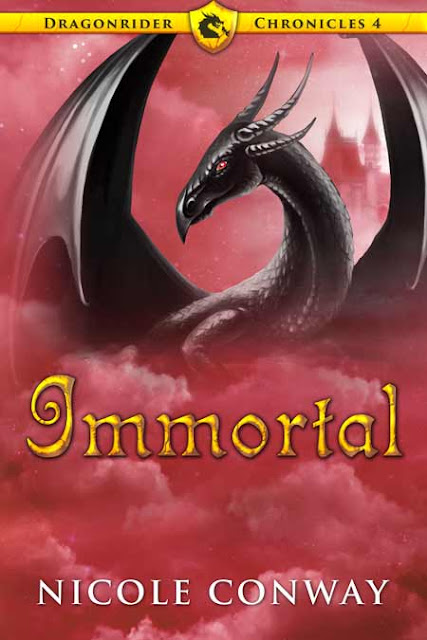 Destiny has called. With Jaevid Broadfeather forever lost to the depths of Luntharda, Felix Farrow struggles to stand on his own. He begins a violent downward spiral which causes him to abandon his post as a dragonrider, hiding in the halls of his family estate. His one hope for redemption lies within the heart of someone from his past—and the very last person he ever wanted to see again. And now the time has finally come.

Hovrid, who has ruled Maldobar as a tyrannical imposter, is preparing to make a decisive assault against Luntharda that will destroy what remains of the elven race. Only Jaevid, Felix, and their trusted friends are able to stand in his way. They have only one chance to end the war, and only one hope to absolve the curse that threatens to destroy their world. The stage is set. The plan is in motion.
What began as one boy’s adventure will now end in blood.

OTHER BOOKS IN THE SERIES: 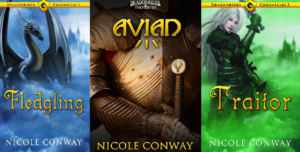 FLEDGLING
When Jaevid Broadfeather is given the rare opportunity to become a dragonrider for the king’s army, the 15-year-old boy has no idea that he is part of a conspiracy that will rock the very foundations of the kingdom.
Jaevid Broadfeather has grown up as a wartime refugee, hiding from the world because of his mixed racial heritage. He feels his future is hopeless, until a chance encounter with a wild dragon lands him in Blybrig Academy—a place usually forbidden to anyone but the rich and royal. But Jaevid’s case is special; no dragon has voluntarily chosen a rider in decades, so the proud riders of Blybrig must begrudgingly let him join their brotherhood despite his bloodline. Lieutenant Sile Derrick, a sternly tempered man with a mysterious past, becomes his instructor and immediately takes a peculiar interest in Jaevid’s future.
While struggling through the rigorous physical demands of training, things begin to go awry. Jaevid witnesses the king’s private guards kidnapping Sile in the dead of night. When none of the elder riders are willing to help him, Jaevid begins a dangerous adventure to save his instructor.
Everything Jaevid learned at the academy will now be put to the ultimate test.


Jaevid wants to pass his Avian year of training . . . but will he even survive it?
What kind of power is lurking inside him? After a year of training to become a dragonrider, Jaevid Broadfeather has been sent home to rest during a three-month interlude. But when he returns to find the king drake has chosen Beckah Derrick as his new rider, Jaevid realizes something big is about to happen. Every fiber of his being is pushed to the breaking point as Jaevid battles through his avian year, preparing for the final graduation test of the battle scenario. But there is more standing in his way than a few pushups and fancy sword moves. Jaevid must face a new fear as he is tormented by a gruesome nightmare of a mysterious gray elf warrior murdering the royal family of Maldobar. It seems obvious to him that this is some kind of message about how the war started long ago—until Felix assures him the king is very much alive. With his strange powers growing stronger by the day, and that violent dream replaying in his mind every night, Jaevid no longer wonders if he will pass his avian year or not—he wonders if he will even survive it.
The truth will soon be set loose.


Can anyone survive being lost in Luntharda?No amount of training has prepared.
Jaevid Broadfeather for the frontlines of battle. Now facing the true horrors of war, with Luntharda looming on the horizon, Jaevid has begun to question everything he thought about his heritage. The only thing keeping him going is his oath to protect his dragonrider brothers. But in an instant, even that slips through Jaevid’s fingers as he steps from the safety of his dragon’s saddle into the depths of his mother’s wild homeland—the kingdom of the gray elves.
Stranded in Luntharda with his partner, Lieutenant Jace Rordin, Jaevid must finally confront the demons of his own past as he uncovers the truth about a war that began before he was ever born. Armed with a new appreciation for destiny, and flanked by his trusted friends, Jaevid moves to make the final strike against an enemy that has hidden in plain sight for far too long.
One kingdom’s traitor will become the world’s last hope.


Link to series on Goodreads:  https://www.goodreads.com/series/136202

Nicole is the author of the children’s fantasy series, THE DRAGONRIDER CHRONICLES, about a young boy’s journey into manhood as he trains to become a dragonrider. She has completed the first two books in the series, and is now working on the third and final book.
Originally from a small town in North Alabama, Nicole moves frequently due to her husband’s career as a pilot for the United States Air Force. She received a B.A. in English with a concentration in Classics from Auburn University, and will soon attend graduate school.
She has previously worked as a freelance and graphic artist for promotional companies, but has now embraced writing as a full-time occupation.
Nicole enjoys hiking, camping, shopping, cooking, and spending time with her family and friends. She also loves watching children’s movies and collecting books. She lives at home with her husband, two cats, and dog.