Blog Tour/Excerpt For NIGHTMARE ON JACEY STREET by Janine McCaw 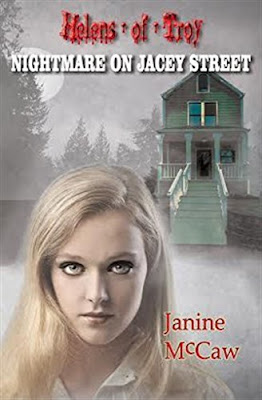 NIGHTMARE ON JACEY STREET, book two in the Helens-of-Troy series, finds matriarch Helena LaRose planning a quiet Thanksgiving dinner with her daughter Helen and granddaughter Ellie. Uninvited guests keep turning up at the door, and when the turkey hits the table, all hell breaks loose.
To add to the craziness, body parts are turning up in the neighborhood. Helen gets a new job at the police station with her mother`s ex-lover Chief Roy Cohen and Ellie gets a new job at the Topaz with her frenemy Tara Wildman. Ryan Lachey and Tom Williams uncover secrets from Jacey's Sumner's mysterious past.
Join the Helens and your favorite Trojans as the hellmouth opens once again and the LaRose women are called upon to ward off the latest terror in the sleepy little town of Troy.
NIGHTMARE ON JACEY STREET...because it's never good when the dead are at your door.

NIGHTMARE on JACEY STREET is the third novel completed by Janine McCaw.  For the Vancouver-based novelist it is the continuation of a dream, and the fruit of years of working in a different creative realm.  McCaw is also currently  working on two additional books: Sisters of Mercy and Pumper.
In high demand as an insightful, humorous and engaging guest speaker, juror and analyst for festivals and trade forums around the country, McCaw also spent large amounts of time traveling abroad to television markets.  Writing relieved the stress of constantly being on the road.  Increasingly, she turned her main hobby into outlines for novels, and finished fleshing out the characters, plot and dialogue for OLIVIA’S MINE, a fictional account of a young bride’s struggle to make a life for herself against the backdrop of the disasters that hit Britannia Beach, British Columbia in the early 1900s.  The book was released in 2006 and continues to be sold at the British Columbia Museum of Mining.
McCaw’s deep understanding of compelling plots, widely appealing characters, natural dialogue and strong story arcs comes directly out of her early career in the film and television industry. McCaw’s skills as an observer started early when her family uprooted from the City to small town Ontario – and she became the classic fish out of water.  Writing down her thoughts became an outlet as she scribbled her way through childhood, while she also developed her observational skills and visual eye with photography.  A die-hard hockey fan, McCaw studied Cinematography at Humber College, and was headed for a career as a cameraperson covering professional sports when she landed an internship in a broadcasting services company.
McCaw excelled in the television distribution arena.  She joined Thomas Howe & Associates and moved with that company to Vancouver, where she distinguished herself with her talent for identifying the right product for the right market, and her people-skills in negotiating contracts. After furthering her professional development with several high-profile Canadian entertainment companies, she parlayed her reputation as a leading Cable Programming specialist into her own boutique firm.  Formed with a partner, Dark Horse Ent. specialized in finding, and selling, niche Canadian television series - entertainment, information and variety - around the Globe.

Free eBook copies of Helens-of-Troy (Book One) via website 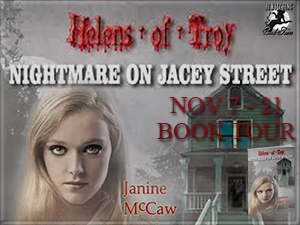