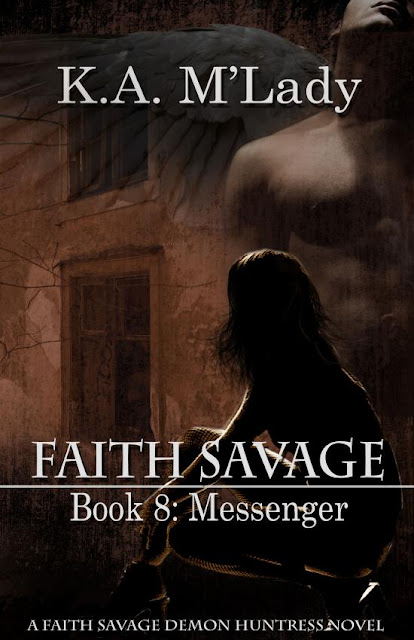 The world is in chaos. School shootings,
war, terrorism, the list goes on. But what if you
could do something about it?
When angelic intervention meets demonic rage,
Faith Savage finds herself caught
in the middle. Talk about tough decisions.
The Message is a Matter of Interpretation --
Belief is in the Hands of Faith

“And when the third seal is broken,’ Jason
continued, preaching to a choir whose interest
was now somewhat piqued, “the balancer rides
in the night. He is the black horseman – the
darkness; the bringer of the ends of time.”
“In for a penny,” I added.
“The end of a pound,” he replied. “I speak of
drought, Faith. And you and I both know
that drought is everywhere. Its destructive
force spreading and its oppressive hands are
burrowing a dry, dark stain across the land,
hungering for just one believer. But the fields are
empty and the livestock barren. This is a world
in crisis, Faith. Drought and hunger and famine
are everywhere. California, Nevada – barren.”
“Do not delude yourself. The Four Horseman
ride, Faith. Death is all around us. Open
your eyes and see, Faith Savage. But more importantly, open your heart. The time is at hand. The
proof is everywhere; on every media channel,
every cyber outlet you can link into. War is on
every continent. Famine. Plagues. I ask you,
what more proof do you need?”
“Yes, Faith Savage,” came the thick, rumble of
my name, uttered as if God had dropped a
ball of thunder off a cliff and waited for the shards
of lightning to follow its decent into the sea.
“What more proof do you need?”
I turned at the sound, dumbstruck once again
by the cool, aloof demeanor of this lethal
giant in eighties rocker casual. My heart stuttered
while I took in the hands stuffed in the front
pockets of jeans so faded out there were holes
worn in them. Glancing down, I noted the shoes;
white leather Capezios. Today’s T-shirt of choice
was once again black, a white stallion blazing
across a fiery roadway. Its rider was armored,
the cross of God on his breast plate, a demon
impaled upon a pike, pike raised to the heavens.
The script across the bottom of it read, I’ll Take
You to Hell. Gabriel, in all his ironies, stood before
me and I was struck with the urge to laugh,
to cower and to tremble, simultaneously.
His scent engulfed me in the warm, rich rush of
cinnamon, wind, earth and haloed man.
The sight of all that caged power in six feet six
inches of man-angel standing before me with the
breeze that ruffled his auburn hair, twisted my
gut with dread. Worry, fear and then uncertainty
followed quickly as the frenzied course of my
thoughts slammed into me all at same time. I
blinked and then blinked again. I took a shaky
breath and considered the moment. Considered his
question. What more proof did I need? The answer? Plenty. 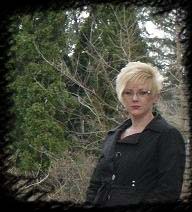 K. A. M’Lady lives in the ‘burbs
of Chicago with her
husband and three children.
She’s been lost in the
world of fiction since she was a
small child, and
frankly, never wants to be
found—at least not any
time soon. “Myth and magic
builds dreams and
inspirations – and in an insane
world, it is our dreams
that spark the revolution of
change. No matter which
world is being conquered.
Within our dreams – all
things are possible.”
http://www.kamlady.net/
http://kamladyotherworld.blogspot.com/
https://www.pinterest.com/KAMLadyauthor
http://www.facebook.com/kamlady
http://www.facebook.com/FaithSavageDemonHuntress
http://www.mojocastle.com 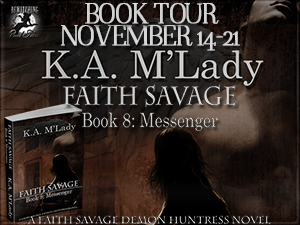