Owen Taylor lost everything in Iraq—his best friend, his faith in humanity, and his leg.
Haunted by the past, and unwilling to accept the future, he takes an IT job with the Guardian Angels Protection Services (GAPS).
Former chef turned GAPS operations manager Lainey Jackson discovers a connection with Owen—a shared love of great food and beer. Terrified by his attraction to her, Owen shuts down, leaving her wondering if she’ll ever have a normal relationship again.
But by the time Owen can admit his feelings for her, he and his fellow GAPS agents must step in when the dangerous secret Lainey's been running from catches up with her.

Lainey frowned and refastened her hair back in a messy ponytail, not willing to recall that bit of the day. She’d met five men, a couple of them in the workout room, and two sitting in Jon’s office poring over files. But one, in particular, had stuck in her head. He’d been in a spare, small office—more like a closet but with less character—in front of a wall covered with different computer monitors set up on a wobbly, cheap-looking table. Like the kind you’d rent for a party and cover with a nice tablecloth.
He’d barely grunted out an acknowledgment of her presence and hadn’t turned to look at her at all—which was too bad because he was quite the specimen. He was wearing a T-shirt and shorts, his dark tanned and tatted biceps covered in a sheen of sweat. She remained in the doorway while Jon and Zane consulted with him about some case or another, taking the opportunity to study his leg—or what passed for it now.
He had one of those blade-style prosthetics from right below his left knee. It was pretty amazing, and she wished it were polite to ask if she could see it closer. By the time she snapped back to herself, she realized the room had gone silent. She blinked and backed away from the man, still sitting at the rickety table, now staring holes into her with the biggest, most expressive pair of blue eyes she’d ever seen.
“Take a picture, it’ll last longer,” he’d said.
“This is Owen,” Jon had said then. “You’ll be replacing him as the official FNG.”
She smiled at Owen, figuring he’d do what most men did and freeze like a deer in the headlights for a few seconds. Instead, he frowned at her and turned back to his screens.
“Owen is our IT expert,” Zane had said, filling the awkward silence that followed. “You know computer geeks. No accounting for them, sociability-wise.” He turned to Lainey and guided her down the hall toward a small conference room. Her ears were hot and her mind buzzing with the memory of him—the elaborate, interwoven vines inked on what she could see of his muscular arms were seared in her mind.
It had been a damn long time since Lainey had been physically attracted to a man. The last time it happened, it was an unmitigated disaster, leading her to her current state of broke and always looking over her shoulder. She set her jaw and forced Owen’s tattoos, metal leg, and amazing eyes right out of her brain. 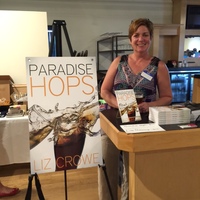 Amazon best-selling author, mom of three, Realtor, beer blogger, brewery marketing expert, and soccer fan, Liz Crowe is a Kentucky native and graduate of the University of Louisville currently living in Ann Arbor. She has decades of experience in sales and fund raising, plus an eight-year stint as a three-continent, ex-pat trailing spouse.
Her early forays into the publishing world led to a groundbreaking fiction subgenre, “Romance for Real Life,” which has gained thousands of fans and followers interested less in the “HEA” and more in the “WHA” (“What Happens After?”).
With stories set in the not-so-common worlds of breweries, on the soccer pitch, in successful real estate offices and at times in exotic locales like Istanbul, Turkey, her books are unique and told with a fresh voice. The Liz Crowe backlist has something for any reader seeking complex storylines with humor and complete casts of characters that will delight, frustrate and linger in the imagination long after the book is finished.
Don’t ever ask her for anything “like a Budweiser” or risk bodily injury.


Liz Crowe writes intense true-to-life stories that make you feel. Whether it's anxiety, love, fear, hate, bliss, or loss woven into her plot lines, you will feel it deep down to your very soul.--Audrey Carlan, #1 New York Times Bestselling Author

Liz Crowe is one of those rare authors who knows how to take the emotions of her characters and make them real for her readers, binding you to the story.”

"Liz Crowe is my drug of choice for unconventional romance that pushes the envelope of my comfort zone."--Bestselling Author of the Enigma Series, Ditter Kellan

“I’ve learned to expect the unexpected with any Liz Crowe novel—along with 3-dimensional characters and well-written, realistic plots.”