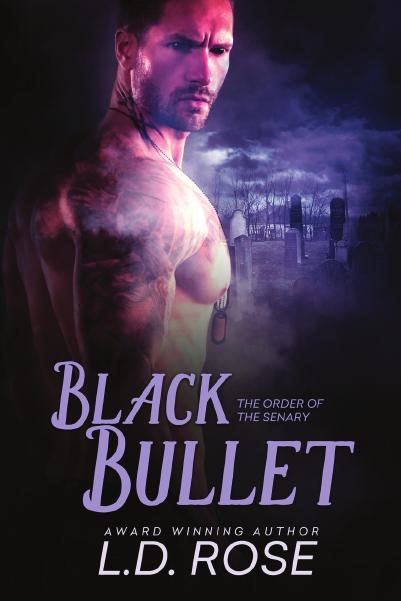 Black Bullet
The Order of The Senary Series #2
L.D. Rose
Genre: Dark Paranormal Romance
Publisher: Soul Mate Publishing
Date of Publication:  11/9/16
ASIN: B01MCWB3GU
Number of pages: 293
Cover Artist: Fiona Jayde
Fledgling vampire Jonathan Kerr has just met his match.
Not even his past life as a former marine and FBI agent could prepare him for the battle against the monster inside him, struggling to take hold. After an old nemesis of the Senary surfaces in Brooklyn, unleashing chaos and terror in the battered borough, Jon sets out to take him down. Instead, he ends up with far more than he bargained for when he clashes with the beautiful half-vampire hybrid, Lawan Knight. After escaping near death and suffering unspeakable horror at the hands of vampires, Lawan trusts no one, regardless of species. In between bouts of drunken stupor, her only goal is to exterminate all those who've wronged her, including every member of Jon's vampire bloodline. But Jon’s soulful eyes and quick smile crawls under her skin, transforming her black and white world into a hazy shade of gray.
As the days rapidly grow darker, Jon and Lawan turn to one another, but their inner demons threaten to tear them apart. The only way either of them will survive is if they overcome
their greatest fear—love.

L.D. Rose is a neurotic physician by day, crazed writer by night, and all around wannabe superhero. She writes paranormal romance and urban fantasy, but she's been known to delve into horror, sci-fi, and
medical suspense on occasion. L.D. Rose is a PAN member of the RWA, FF&P, NEC-RWA and CoLoNY. She currently lives in Rhode Island with her studly hubby, her hyperactive boxer, and her two devious cats.
Sign up for her newsletter for the latest on the Senary, sneak peeks, giveaways, and other fun stuff: http://eepurl.com/bKvuXD
You'll receive a free horror short story with sign-up!
You can also join her street team on FB for more shenanigans.
DEVOUR THE NIGHT: https://www.facebook.com/groups/1544747369161573/ 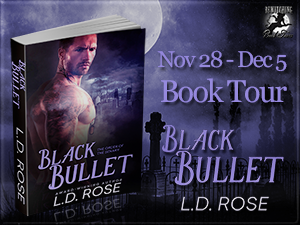 Thank you very much for the feature! <3