Spotlight Post & Giveaway For CHILDREN OF THE VEIL by Colleen Halverson 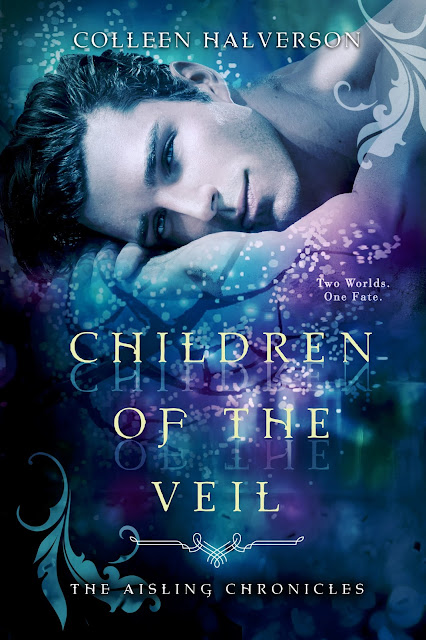 Children of the Veil
The Aisling Chronicles #2
Colleen Halverson
Genre: Urban Fantasy
Publisher: Entangled
Date of Publication: Oct 26, 2016
ISBN: 9781633757738
Number of pages: 400
Elizabeth Tanner has one goal: to find her mother in whatever dimension she’s imprisoned. But to do that, she has to face her estranged father, and to do that, she needs a shot of whiskey…or seven. But after an attempt on her life and the return of her lost love, she wakes up with one hell of a hangover and a whole barrage of questions. Finn O’Connell doesn’t know why the Fianna want him to aid Elizabeth in her search, but he’ll take any excuse to be near her again. Together, they dive headlong into the shadows of her mother’s secrets and find themselves embroiled in a Fae rebellion that will test Finn’s loyalties and their love. With the Faerie realm verging on chaos, Elizabeth and Finn will embark on a quest that will lead them from the streets of Chicago to London’s seedy Fae underground. But rescuing Elizabeth’s mother means journeying to a place Finn can’t follow, and Elizabeth is forced to make a choice between finding her at last or saving her own soul. 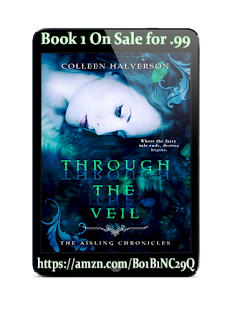 Quiz for book 1 Through the Veil

Playlist for Children of the Veil on spotify HERE.

Excerpt
Finn stood up and placed his hands on my shoulders, massaging my sore muscles. I turned my head to the side, allowing him access to my neck. He rubbed his thumb down my spine, and I let out a soft moan as the tension in my body released. “The way you addressed that soldier tonight, and your oath to Phelan,” he said. “I have to admit, I was quite enamored by your display of power.”“Oh, you ain’t seen nothing yet, Mr. O’Connell.” My fingertips hummed with aisling energy as he brushed my hair aside and kissed me between my shoulder blades. In spite of my exhaustion and everything I learned tonight, my body ached for him. “I think royalty looks good on you.” He smoothed his hands down my arms, and breathed into my ear. “But then again, I think everything looks good on you, Princess” I placed my hand over Finn’s. “You just want to see me in a dress again.” “I suppose I’m still stuck in the 18th century.” He stroked my hair, pulling my wayward curls behind my ears. “I’m not sure if I’ll ever get used to seeing women in trousers.”I stood up and stretched, turning to the cot in the corner. “Well, get used to it, buddy.” Finn grabbed my ass, and I squealed as he pulled me into his lap, the rickety wooden chair groaning beneath our weight. “I could get used to these tight blue jeans, however.” Finn moved his hand down my hip. “They are quite flattering in a twenty-first century sort of way.”“I’m glad you approve,” I breathed into his ear, reaching back and placing his cheek close to mine.“It’s just that a lady’s skirts made it much easier to do this.” Finn wrapped his arm around my waist and slipped his fingers inside the waistband of my jeans.I gasped, grabbing at his hand—to release me or plunge deeper, I wasn’t sure. 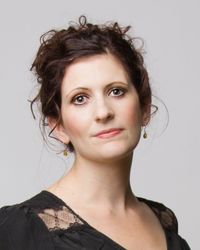 As a child, Colleen Halverson used to play in the woods imagining worlds and telling stories to herself. Growing up on military bases, she found solace in her local library and later decided to make a living sharing the wonders of literature to poor, unsuspecting college freshmen. After backpacking through Ireland and singing in a traditional Irish music band, she earned a PhD in English with a specialization in Irish literature. When she’s not making up stories or teaching, she can be found hiking the rolling hills of the Driftless area of Wisconsin with her husband and two children. CHILDREN OF THE VEIL is the follow up to her debut urban fantasy novel, THROUGH THE VEIL.
www.colleenhalverson.com
twitter: https://twitter.com/cbhalverson
facebook: https://www.facebook.com/cbhalverson/
Instagram: https://www.instagram.com/colleen_halverson/
Goodreads: https://www.goodreads.com/author/show/14777224.Colleen_Halverson 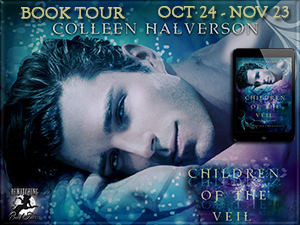