Blog Tour/Excerpt & Giveaway For LIGHT A ROCKET by Julia Talbot 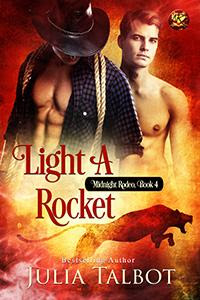 Love is possible when the spirits move you. Skinwalker Raven Walkingman is the number one cowboy, at the top of his game at the Darque and Knight rodeo. He has his animal spirit guides, good friends, and a fancy trailer. Raven prefers casual relationships, so when Rocket starts talking about mating as shifters do, Raven pulls up the stakes. He doesn't need to fall for a ragtag cheetah. Cat shifter Rocket is fast, but he only has so many lives left, and he spends more time injured than not. He’s the worst rider at Darque and Knight. Raven’s spirit guides adore him, though, and are more than happy to support him in his work and pursuit of Raven.Raven and Rocket seem like an unlikely match, and sometimes it takes an otherworldly guide to make it right.

Excerpt:
Watching Rocket run on the little track at the now-defunct high school turned rodeo complex in… Crap. Kansas? Nebraska? Somewhere with corn. Watching that gave Raven a hell of an itch to scratch.The little bastard was fast—no. Not fast. Breathtaking.That speed glued Raven’s tongue to the roof of his mouth, and he wasn’t used to such an intense interest in a particular man.Raven just needed to fuck Rocket into the mattress a few times. That would jostle this obsession out of him, get him back into his love-them-and-leave-them ways.His dick told him he could do that right now, thanks.Raven stared, fascinated by the way Rocket’s muscles moved, shifted, and rolled beneath the golden skin. He wanted to lick that flesh, wanted to rub against it. All of the spirits clamoring in his head agreed.Rocket slowed, beginning to move alongside Blaine, the little bullfighter matching Rocket’s speed. The two of them were a pretty picture, and Raven gave up any pretense of working out, stopping to stare.Denver chuckled softly, surprising him. “They can move, huh? All that work and they still want to run afterward. I just want a fucking beer.”“No shit.” Raven did like Denver. A lot. “Pretty, though.”“Both of them. You gonna play some?”“Well, not with your Blaine.” He winked when Denver growled. “But yeah. I am.”“Never heard anyone complain, honey.” Denver winked. “Of course, you and I never did get around to trying each other out.”“And now you’re all taken.” He shook his head in mock sorrow. Denny and him, they would have ended up bruised and bloody and only done it once. Might have been worth it, though.Denver’s smile was slow and wicked. “Pity for you, King Raven. I’d have made you beg for more.”Blaine began to head over, the little wolf sensitive as all fuck. He could probably sense the vibrations of Denver’s cock or something. God knew the hot bastard was tossing off pheromones left and right.
“Mmm. No one has ever made me beg, Green.” He loved the kitty cavalcade nickname for Denver.“No?” Denver grabbed him, squeezed him tight, and the embrace was fond and warm, only the slightest bit sexual. “Have fun tonight, man. Don’t break him. I sorta think Blaine’s fond.”“I’ll only give him what he wants. I don’t do force.” Raven hugged back, smelling wolf scent and pot smoke and a deep sense of happiness in Denny.So much more present than Dent had been.The thought of the fallen bullfighter brought his wolf spirit to full focus, though, the needto comfort Denny instinctual. Losing a twin had to be like getting part of your soul torn out.Denny looked at him, eyes knowing for a moment and the sudden wave of loss nearly knocked him off his feet, then Blaine touched Denver’s arm and it eased back to something reasonable, something bearable.Raven released Denver, who turned and snagged Blaine, their strong bodies rubbing in the best way possible. “You done running with the cheetah, baby?” Denver asked.“I am. Did you see him? He can’t maintain it long, but… shit, he doesn’t have to.”“He’s quick,” Raven agreed. “Better runner than a bull rider, for sure.”“Oh, shit. Rocket’s the world’s shittiest bullrider. Him and Ben Ursa should form a club.”Denver had more than a little evil in him.Blaine chuckled. “Ben is good with horses. Rocket needs to find something to do with his running.”“Yeah. Yeah, he does. Later.” Denny shot Blaine a look that was pure need. “Later.”“Uh-huh.”

Julia Talbot lives in the great Southwest, where there is hot and cold running rodeo,cowboys, and everything from meat and potatoes to the best Tex-Mex. A full time author, Julia has been published by Samhain Publishing, Dreamspinner Press, All Romance eBooks and Changeling Press. She believes in stories that leave a mark, and that everyone deserves a happy ending, so she writes about love without limits,where boys love boys, girls love girls, and boys and girls get together to get wild, especially when her crazy paranormal characters are involved.
Find Julia at @juliatalbot on Twitter.
For more information on other books by Julia, please visit her official website:http://www.juliatalbot.com
http://twitter.com/JuliaTalbot
https://www.facebook.com/juliatalbotwriterpage 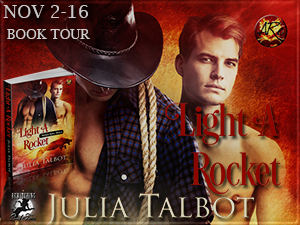