Spotlight Post & Giveaway For MY ROGUE, MY RUIN by Amalie Howard and Angie Morgan 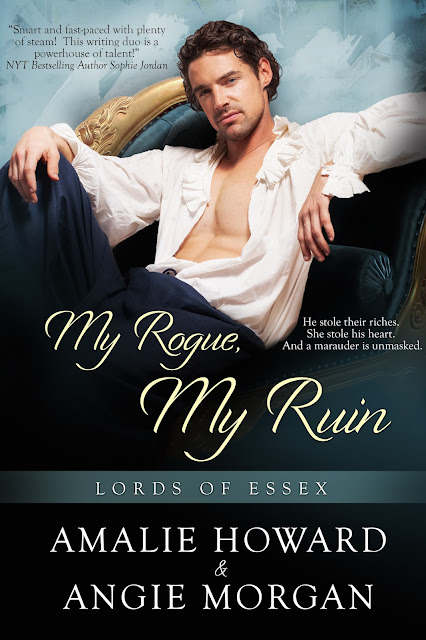 “Smart and fast-paced with plenty of steam! This writing duo is a powerhouse of talent!” – New York Times bestselling author Sophie Jordan

He stole their riches, she stole his heart

The Marquess of Hawksfield’s lineage is impeccable and his title coveted, but Archer Croft is as far from his indulgent peers as he can get. His loathing for the beau monde has driven him to don a secret identity and risk everything in order to steal their riches and distribute them to the less fortunate.

Lady Briannon Findlay embraces her encounter with the Masked Marauder, a gentleman thief waylaying carriages from London to Essex. The marauder has stirred Brynn’s craving for adventure, and she discovers an attraction deeper than the charming thief’s mask.

Brynn is a revelation, matching Archer in intelligence, wit, and passion. Stubborn and sensuous in equal measure, she astonishes him at every turn, but when someone sinister impersonates Archer’s secret personality, and a murder is committed, Archer begins to think he doesn’t stand a fighting chance without her.

Add MY ROGUE, MY RUIN to Goodreads:

Get your hands on MY ROGUE, MY RUIN now:
Amazon   iBooks   Barnes & Noble   Kobo

Lady Briannon Findlay was going to die.
She sat back against the squabs inside her father’s coach, her eyes locked on the lethal nose of a polished pistol barrel, and half-wished she had worn a finer gown for the occasion. As it stood, her body would be found on the side of the road in the most atrocious gray velvet
dress known to man. She might have had a fighting chance had she been wearing her breeches.
And her pistol. Sadly, she had neither.
“No displays of heroism, please,” a voice behind the gun drawled.
All sense of time slowed to a dull stop, and Brynn’s breath lodged like a stone in her throat. Becke', their coachman, stood within the open gap of the carriage door, his white curled wig gone from his head, exposing a mop of red hair. He was not alone. A man suited in
black, with a black mask obscuring most of his face, stood beside the coachman, the barrel of a second pistol tucked into Becke's ribs. Her heart hammered a brutal staccato in her chest.
“Now that we have that out of the way, shall we begin?” the man said with a slow, breaking smile. His teeth caught the shine of the carriage lantern, and Brynn frowned. The highwayman that had just set upon their carriage on the darkened, private lane running
between her family’s estate and the neighboring grounds of Worthington Abbey, possessed, quite possibly, the nicest smile
she had ever seen.
What sort of robber smiled at his victims? Despite the pistols he held and the fear that gripped her, it was his perplexing mouth she was staring at when her mother, seated on the bench opposite, let out with a bloodcurdling scream. Brynn clapped her gloved hands over her ears as Lady Dinsmore’s long-winded screech nally waned and croaked off.
The masked man hadn’t flinched. Instead he vaulted a mocking eyebrow to match the smirk on his lips. “My good woman, have a care for the eardrums of your fellow travelers and refrain from doing that again. I assure you, I do not intend for anyone to lose their hearing
tonight—just their valuables.”


AMALIE HOWARD grew up on a small Caribbean island where she spent most of her childhood with her nose buried in a book or being a tomboy running around barefoot, shimmying up mango trees and dreaming of adventure. 25 countries, surfing with sharks and several tattoos later, she has traded in bungee jumping in China for writing the adventures she imagines instead. She isn’t entirely convinced which takes more guts.
She is the award-winning author of several young adult novels critically acclaimed by Kirkus, Publishers Weekly, VOYA, and Booklist, including Waterfell, The Almost Girl, and Alpha Goddess, a Spring 2014 Kid’s INDIE NEXT title. Her debut novel, Bloodspell, was a #1 Amazon bestseller, and the sequel, Bloodcraft, was a national silver IPPY medalist. She is also the co-author of the adult historical romance series, THE LORDS OF ESSEX. As an author of color and a proud supporter of diversity in fiction, her articles on multicultural fiction have appeared in The Portland Book Review and on the popular Diversity in YA blog. She currently resides in Colorado with her husband and three children.
Website: http://amaliehoward.com/
Newsletter: http://amaliehoward.com/contact/newsletter/
Twitter: https://twitter.com/amaliehoward
Instagram: https://www.instagram.com/amaliehoward/
Facebook: https://www.facebook.com/AmalieHowardAuthor
Pinterest: https://www.pinterest.com/amaliehoward/
Tumblr: http://amaliehoward.tumblr.com/ 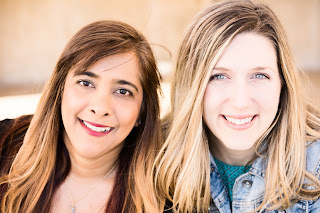 Angie is the author of several critically acclaimed young adult and middle grade books written under two other names (Page Morgan and Angie Frazier), and is now thrilled to be taking a much-anticipated leap into the world of adult romance. My Rogue, My Ruin is the first of three books in her new Lords of Essex series, co-written with good friend and fellow author, Amalie Howard. Angie lives in New Hampshire with her husband, their three daughters, and a menagerie of pets.
Website: http://angiemorganbooks.com/
Newsletter: http://angiemorganbooks.com/contact/
Twitter: https://twitter.com/PageMorganBooks
Instagram: https://www.instagram.com/angie_page_morgan/
Facebook: https://www.facebook.com/profile.php?id=100008798550978
Pinterest: https://www.pinterest.com/pagemorgan/