Blog Tour For VENGEANCE OF A VIKING by Sky Purington 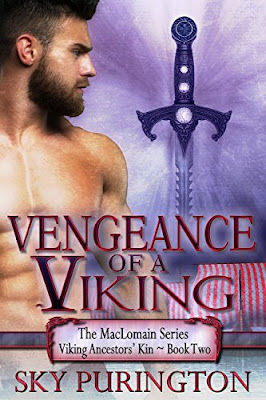 Recently divorced, Samantha is all about new beginnings. Her own company. A beautiful seaside house in Winter Harbor, Maine. A chance to reconnect with her sisters. But fate has something else in store. Tenth-century Scandinavia and a reality she never could have anticipated. After being whisked back in time not once but twice, she ends up in a situation she didn’t see coming. Kidnapped by a Viking.Of dragon blood, Bjorn Sigdir knew the moment he met Samantha that she was nothing but trouble. How else could it be? She bears the mark of Gungnir, the sword given to Odin by Loki. A blade he is convinced will ruin his people and all affiliated with them. Determined to protect his kin, he concocts a plan that will keep Samantha and her unfortunate tattoo far away from trouble. Or so he thinks when he yanks her back in time.
One a captor, one a prisoner, Bjorn and Samantha embark on a journey full of unending strife. Feisty and independent, she has her own mind. Headstrong and stubborn, he does too. However, they soon have bigger problems than their mutual dislike of each other. Secrets. Ones that force them closer and forge something unexpected. Respect. Attraction. Desire. Yet they face a huge obstacle. If they give into love, all could be lost, including everyone they care about.
Amazon    Kobo     BN     iTunes

Excerpt:
“All right, lead the way, kidnapper,” Samantha declared. “But I hope to heck it’s in the direction of your fortress because last I checked you had an ailing father and a best friend turned king who needs you.” Bjorn ignored her sarcasm and frowned as he nudged her along through the forest. Näv had done him no favors with Samantha’s outfit, and well the devious seer likely knew it. Now she wore brown, fitted leather pants and a snug jerkin that did nothing to hide her figure. Naturally, the feisty redhead swayed her hips invitingly though they traveled over rougher and rougher terrain. And by Loki’s balls, he knew she did it on purpose. “So, when are you gonna tell me why you’re avoiding your family and obligations just for little old me?” she finally said. Samantha had a strange way of saying things. He understood her meaning more so because of her various, unending expressions than because of her actual words. As it was, the Yggdrasill allowed them to understand one another’s language but not necessarily the slang terms or twenty-first century sayings. So there was room for interpretation. Or at least there would be with any other woman besides Samantha. His eyes remained locked on her swaying backside. She made things pretty clear. “Bjorn?” She stopped short, and he walked right into her. Like the night before, they both froze. Unable to control himself, he leaned down, nuzzled close and inhaled the scent of her soft, thick hair. It smelled of sweet flowers that had warmed in the sun all day. “Bjorn,” she whispered and turned ever-so-slowly, curling into him like a cat might her master…like a sweet little dragon might her captor. He licked his lips, eager to play her game. Curious to see how far she would take it. “Did you know I’ve got a thing for you?” she purred as she flicked her tongue along the side of his neck and her hand trailed up his thigh. “Since the moment I saw you in that cave in the mountain.”
“Did you really?” he murmured, remembering well her appreciation for all men present. But hell if he wasn’t enjoying this. So he grabbed her backside with one hand and more than relished the gasp she released when he yanked her close. “Tell me more. ”She swallowed, unsure for a moment before she continued, her voice ridiculously sultry. “How could I not?” she murmured. “You were all big and strong and…”
When her hand closed over the hilt of the dagger at his waist, his hand closed around hers and squeezed. “And what, Samantha?” he whispered close to her ear. Yet again their eyes met and narrowed on each other except this time their lips were inches apart. Her heartbeat quickened. So did his. He squeezed her backside while slowly guiding her hand to pull his dagger out and press it to his side. Bjorn repositioned it until one good thrust would be all it took. “Is this what you want, woman? To end me?” Their eyes continued to hold, but she said nothing. Yet something happened. Something he didn’t expect. 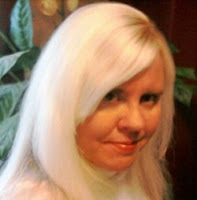 Sky Purington is the bestselling author of over twenty-five novels and several novellas. A New Englander born and bred, Sky was raised hearing stories of folklore, myth and legend. When combined with a love for nature, romance and time-travel, elements from the stories of her youth found release in her books. Purington loves to hear from readers and can be contacted at Sky@SkyPurington.com. Interested in keeping up with Sky's latest news and releases? VisitSky's website, http://www.skypurington.com todownload her free App on iTunes and Android or signup for her quarterly newsletter. Love social networking? 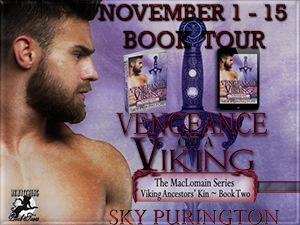