Review Plus GIFS to Describe INFINITY by Jus Accardo (Or in Other Words-A Delightful Way to Spend Your Sunday Afternoon!) 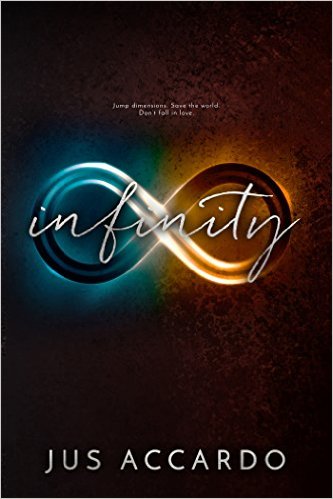 There are three things Kori knows
for sure about her life:

One: Her army general dad is
insanely overprotective.

Two: The guy he sent to watch her,
Cade, is way too good-looking.

Three: Everything she knew was a lie.

Now there are three things Kori
never knew about her life:

One: There’s a device that allows
her to jump dimensions.

Two: Cade’s got a lethal secret.

Three: Someone wants her dead

Jump dimensions. Find the bad guy. Don’t fall in love.
Nobody said being the daughter of an army general was easy. But when her dad sends a teenage subordinate to babysit her while he’s away? That’s taking it a step too far. Cade, as beautiful as he is deadly, watches Kori with more than just interest. He looks at her like he knows her very soul. And when he saves her from a seemingly random attack, Well, that’s when things get weird.
Turns out, Kori’s dad isn’t just an army general―he’s the head of a secret government project that has invented a way to travel between parallel dimensions. Dimensions where there are infinite Koris, infinite Cades…and apparently, on every other Earth, they’re madly in love.
Falling for a soldier is the last thing on Kori’s mind. Especially when she finds herself in a deadly crossfire, and someone from another Earth is hell-bent on revenge…

Thank you Jus for your selections on the
GIFs that go along with the blurb.
I  love that they are so full of emotions! 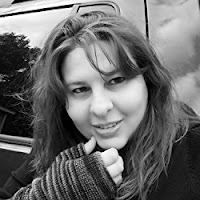 JUS ACCARDO spent her childhood reading and learning to cook. Determined to follow in her grandfather's footsteps as a chef, she applied and was accepted to the Culinary Institute of America. But at the last minute, she realized her true path lay with fiction, not food. Jus is the bestselling author of the popular Denazen series from Entangled publishing. A native New Yorker, she lives in the middle of nowhere with her husband, three dogs, and sometimes guard bear, Oswald.

This is quite probably the best book I've read this year! I loved the characters but more than that is the endless possibilities here for these characters. How awesome that Jus could (maybe, hopefully) portray each and every character a dozen different ways. On each parallel earth she gets the opportunity to rewrite each individual with totally different characteristics. Heck she can even turn a he into a she! OMG! what an opportunity for a writer and by default-ME and other lovers of books. I gotta tell you Jus this is so awesome it makes my head explode at the possibilities!
Now, to get back to this set of characters in our world. While Kori is pretty much a typical teen trying to deal with the loss of her Mom to cancer, she is mature in so many other ways. I'm sure that moving from one army post to another every year or so and being the daughter of a general accounts for a lot of this. While her unauthorized painting of murals may seem typical teen, she is one who will face up to the consequences of her actions without hesitation, without excuses. She sees these murals as a way of keeping her mother alive and honoring her memory,
of living her life in vivid color.
I can so understand her snarky reaction to her Dad leaving her to be babysat by a couple of teenage subordinates. There are more than a few lol moments here. I was initially afraid that there would be a romantic triangle between Kori, Cage and Noah but loved the twist in this possible romance. The action is pretty much nonstop in this story and the possibilities endless. The only drawback I had to the whole story was the speed that had me reading from cover to cover in one sitting. Crap! now I've got to wait endlessly (to me) till the next book comes out.
One saving grace though, I have the " DENAZEN" series on my Kindle and if it's a fraction as wonderful (and all the reviewers rave about it) as "INFINITY" maybe, maybe I'll survive till the next "INFINITY" book is released.
Posted by Lisa Richards/alterlisa at 11:43 AM