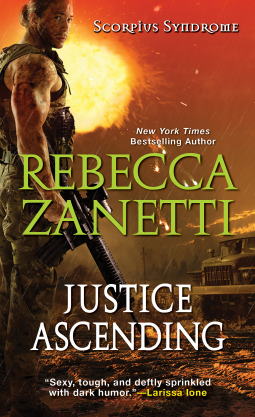 Copy provided for the purpose of providing an honest review.
This does not affect my opinion of this book.

Before surviving the Scorpius bacterium, Tace Justice was a good ole Texas cowboy who served his country and loved his mama. After Scorpius, the world became dark, dangerous, and deadly... and so did he. The Vanguard medic is stronger, faster, and smarter than before, but he's lost the line between right and wrong. His passion is absolute, and when he focuses it on one woman, there's no turning back for either of them.
Sami Steel has been fighting to survive right alongside Tace, convincing the Vanguard soldiers she's one of them. In truth, Sami is a former hacker turned government agent who worked at The Bunker, where scientists stored both contaminants and cures. Only she knows the location, and she's not telling. Yet when sexual fire explodes between her and Tace, she'll face even that hell again to save him.

This is my favorite type of romance-post-apocalyptic. I've read each of the books in this series and it only gets better and better with each book. Though this is the third book in the series, they can be read as standalones, though the story is so much richer by reading them all and in order.
Trace was a medic before Scorpius and is a valued member of Vanguard. Sami is a kick-ass lieutenant of Vanguard and claims to have been a member of the LAPD. It's been fun watching these two dance around each other up to now. But the the time has come to fish or cut bait. While the action is nonstop, the romance is hot and adorable. Zanetti has added yet another winner to this series and at two books a year in this series from her plus her Blood Brothers series, my hero! 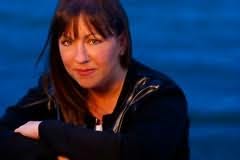 Rebecca Zanetti wrote her first story when she was six a romance between a princess and neighboring prince. The princess fell out of her castle and the prince rescued her. A happily ever after was had by all.
This theme of romance has been carried through Rebecca's works until present time. While todays heroine may have a medical degree, black belt in Karate and her own 401K, she's still after that happy ending. Rebecca attended Pepperdine University, earning a bachelor's degree in Journalism with a Political Science emphasis. While there she worked as the Editor-in-Chief of The Graphic newspaper, a member of the Pi Phi Sorority and an intern for President Reagan, who still gave 3-5 speeches a week, even though he was no longer president. After college, Rebecca worked as an art curator and a Senate aide before heading to law school, where she received her Juris Doctorate from the University of Idaho. She married Tony Zanetti in the middle of her second year of law school and became pregnant with their first child during the third year. She graduated law school, gave birth three weeks later, and took the Bar Exam three weeks after that. She worked for a large firm, then a small firm, then the county while also teaching legal classes at her local community college. Now she writes about vampires.
Growing up amid the glorious backdrops and winter wonderlands of the Pacific Northwest has given Rebecca fantastic scenery and adventures to weave into her stories. She resides there with her husband, children and extended family who inspire her every day.

Posted by Lisa Richards/alterlisa at 1:00 PM