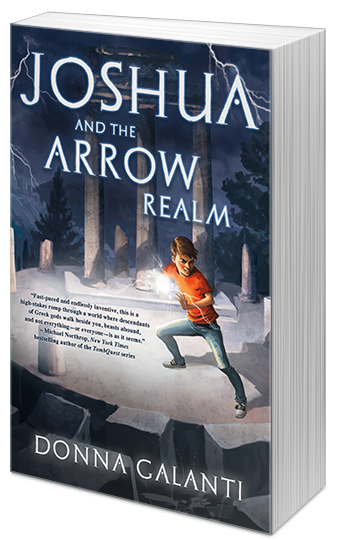 Joshua never thought he'd return to the world of Nostos so soon. But, when King Apollo needs his help in the Arrow Realm, Joshua's will and powers will be tested in order to save him.
With his loyalties divided between our world and theirs, Joshua wonders whether he alone can restore magic to the twelve powerless Olympian heirs, or whether he is being tricked into making the one mistake that might cost them all.
JOSHUA AND THE ARROW REALM is the exciting follow up to JOSHUA THE LIGHTNING ROAD which the Midwest Book Review called, "a heart-pounding thrill ride." 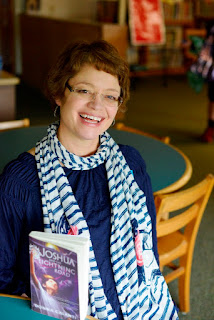 Donna is the author of the Joshua and the Lightning Road series and the Element Trilogy. She is a contributing editor to International Thriller Writers the Big Thrill magazine and blogs at www.project-middle-grade-mayhem.blogs..., a cooperative of published middle grade authors. Visit her at www.donnagalanti.com and www.ElementTrilogy.com. Donna wanted to be a writer ever since she wrote a murder mystery screenplay at seven and acted it out with the neighborhood kids. She attended an English school housed in a magical castle, where her wild imagination was held back only by her itchy uniform (bowler hat and tie included!). There she fell in love with the worlds of C.S. Lewis and Roald Dahl, and wrote her first fantasy about Dodo birds, wizards, and a flying ship (and has been writing fantasy ever since). She’s lived in other exotic locations, including her family-owned campground in New Hampshire and in Hawaii where she served as a U.S. Navy photographer. She now lives with her family and two crazy cats in an old farmhouse and dreams of returning one day to a castle.