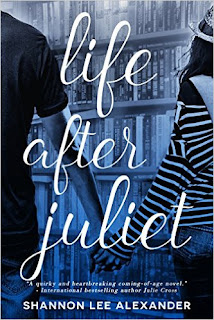 Title: Life After Juliet
Author: Shannon Lee Alexander
Genre: YA Coming of Age
Rating: * * * *
Publishers: Entangled Teen
(July 5, 2016)
Paperback: 304 pages
ISBN: 978-1633753235
FTC Disclosure: ARC provided by the publisher via Netgalley
Becca Hanson is a reader-a voracious reader. And with all those fictional friends, she never had time for real ones. Plus real ones come with uncontrollable quirks, like constantly filling a room with song, drawing on any available surface, and worst of all, dying. Real friends are more trouble than they're worth. Since her best-and only-real friend Charlotte's death six months before, Becca has returned to a life of books in order to distance herself from heartache and constant loneliness as her junior year at Sandstone High begins.
When a class project forces her into the Drama Club, she attracts the attention of not one, but TWO guys involved in the production, onstage and off. Meanwhile, she's still dealing with the grief of Charlotte's death--the fact that Charlie is away at MIT--and that she finally has to build a life for herself on her own terms. Ultimately she learns more about who she is, what she wants, how she feels--and how to find what she's looking for. (And while she isn't sure what comes next, she's pretty sure there'll be more kissing involved.)

I was hesitant to read this book as I figured it would leave me ugly crying. When I was in high school I had three good friends killed in a car accident, through no fault of theirs, and I still remember the horror of being told this by the mother of another friend of ours. I went to more funerals in three days than I had ever been to before in my life and it was eons before things ever went back to "normal" (if they ever did). I was lucky that I had other friends to lean on during this ordeal and we supported each other in many ways. I can't image the pain Becca went through not having other close friend to talk to but I definitely understand her losing herself in her books. This is similar to how I reacted when my hubby was diagnosed with lymphoma and something that got me through many sleepless days and nights.
The saving grace here is that I also found myself laughing at Becca and
having been through a similar loss at this age, understood her anger and uncontrolled rage at the unfairness of life. One of the friends I lost was the twin sister of a guy I adored and I understood the pain she was in. This is the first book of Alexander's I've read and I'm definitely going to keep her name in my watch pile. It will probably be awhile before I can psych myself up to read Love and  Other Unknown Variables, however. 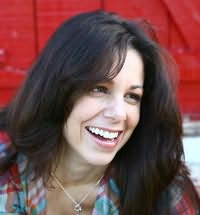 Shannon Lee Alexander is a wife and mother
(of two kids and one yellow terrier named Harriet Potter). She is passionate about
coffee, books, and cancer research. Math makes her break out in a sweat.
Love and Other Unknown Variables
is her debut novel. She currently lives
in Indianapolis with her family.
Posted by Lisa Richards/alterlisa at 11:04 PM