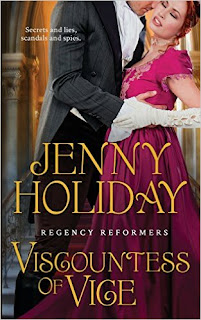 Title: Viscountess of Vice
Series: Regency Reformers
Author:  Jenny Holiday
Genre: Historical Romance
Publishers: Entangled Publishers
(Jan 25, 2016)
Paperback: 336 pages
ISBN: 978-1682810941
Secrets and lies, scandals and spies. All Lady Catharine, Viscountess Cranbrook, wants is a little excitement. Bored of playing the role of the ton's favorite slightly scandalous widow, she jumps at the chance to go undercover as a courtesan to help with an espionage mission. After all, beneath her outrageously low bodice beats the heart of a patriot. Social reformer James Burnham is conducting a study of vice in England's capital. Driven by his own secrets, he is methodical, intelligent-and wickedly handsome. Catharine is the last sort of woman the upstanding James should want. But want her he does, though she stands for everything he opposes. When Catharine and James are forced to band together to advance their causes, they'll be drawn into a web of secrets and lies that endangers their lives-and their hearts. 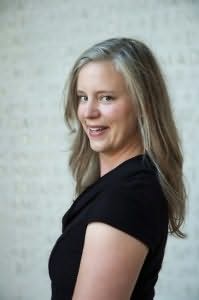 Jenny Holiday started writing at age nine when her awesome fourth grade teacher gave her a notebook and told her to start writing some stories. That first batch featured mass murders on the loose, alien invasions, and hauntings. (Looking back, shes amazed no one sent her to a kid-shrink.) Shes been writing ever since. After a brief detour to get a PhD in geography, she worked as a professional writer, producing everything from speeches to magazine articles. More recently, her tastes having evolved from alien invasions to happily-ever-afters, she tried her hand at romance. A lifelong city-lover, she lives in Toronto, Canada, with her family. She is represented by Courtney Miller-Callihan of Greenburger Associates

Posted by Lisa Richards/alterlisa at 7:03 PM