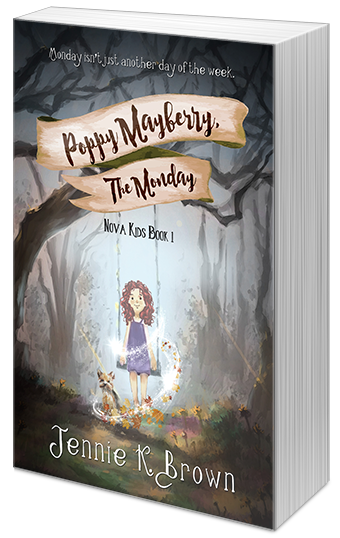 What if your teacher could read your mind just because she was born on a Thursday? Or the kid next to you in class could turn back the clock just because he was a 'Wednesday''? In the quirky town of Nova, all of this is normal, but one thing is not---Poppy Mayberry. As an almost-eleven-year-old Monday, she should be able to pass notes in class or brush her dog, Pickle, without lifting a finger. But her Monday telekinesis still has some kinks, and that plate of spaghetti she's passing may just end up on someone's head. And if that's not hard enough, practically perfect Ellie Preston is out to get her, and Principal Wible wants to send her to remedial summer school to work on her powers! It's enough to make a girl want to disappear...if only she were a Friday.

My Inspiration Behind
Poppy Mayberry, The Monday
by Jennie K Brown
A lot of people are intrigued by magical powers based on birth day of the week, and the idea actually came to me when I was stopped at a red light in my hometown. I glanced up at the Starbucks on the corner across the street to see a young girl tossing a ball into the air. From the angle I watched, it looked as if the girl was controlling the ball with her mind. At pretty much the same time I asked myself, What day of the week is it? (I have a tendency to lose track of the days over the summer!) And then I put those thoughts together – What if a person had certain powers depending on the day of the week? Or what if a person had a special power specific to the day of the week in which they were born? And that’s where I got the concept for Poppy’s town of Nova. Inspiration can strike anywhere!

Ellie slouched in the chair and stared at the clock above his head. “I guess I can try to do a better job with them,” she said unconvincingly while twirling a few strands of brown hair around her finger.
Mr. Wible laughed. “You’re going to have to do a little more than try, Ellie. And I’m going to see that you do so.”
He slid the binder across the large desk, and I could now make out the cover. An audible laugh escaped from my lips.
Ellie rolled her eyes, yet again, and sat back up to reach for the binder. “Ohhhh, no, no, no, no, no.” She stood up with hands firmly planted on her hips. “There’s nooo way I am going there.” Her filed finger wiggled at Mr. Wible and then she leaned down and rummaged through her purse. I assumed she was looking for the new rhinestone cell phone she showed off to our entire class last week.
“No use calling them, Ellie. Your parents are in complete agreement,” he said, totally using his own Thursday mind-reading powers on her. “You’re already enrolled in the Academy.”
Her breath came out in quick, short bursts. “I can’t leave my friends behind. There is no way I am going to that place …” she stuttered, “… alone.”
“Oh, you won’t be attending Power Academy alone,” Mr. Wible reassured her. That’s when his beady eyes meet mine. I panicked, sure of the words that were about to fly from his mouth. Knowing that I, too, needed a whole lot of work in the whole Monday power department.
“Poppy Mayberry will be joining you.”
Ugh. These were going to be the longest weeks of my life.

Jennie K. Brown is a high school English teacher by day, freelance magazine writer by night, and middle grade/young adult author by late-night and weekend. When she isn’t teaching or writing, Jennie can be found reading a good book, traveling, or spending time with her awesome husband, amazing son and super-spoiled yorkie.In 2010, the National Council of Teachers of English (NCTE) named Jennie the Pennsylvania English teacher of excellence, and she currently serves as President of the Pennsylvania Council for Teachers of English and Language Arts (PCTELA). She is also an active member of SCBWI, NCTE and ALAN.

⦁ One (1) winner will receive a scrabble tile book cover charm (US ONLY)
⦁ Five (5) winners will receive a digital copy of
Poppy Mayberry, The Monday by Jennie K. Brown (INT)
a Rafflecopter giveaway

sounds like a fun read that my daughter would enjoy