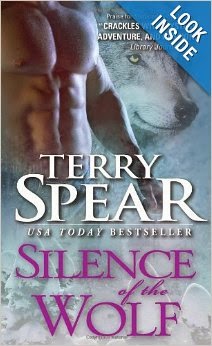 Life For the Silver Pack Just Got Wilder...
Elizabeth Wildwood has been a loner all her life, ostracized because of her "mixed" half-wolf, half-coyote blood. When she ventures into gray wolf territory on a dangerous quest of her own and his thrown together with the sexiest shifter she's ever met she begins to wish for the first time that she could be part of a family.
When this unusual shifter female comes into his pack's territory, it's Tom Silver's job to protect her—if only she would let him.
Turn up the heat with Terry Spear's paranormal romance:
"Dark, sultry, and primal...The chemistry is blazing hot and will leave readers breathless."—Fresh Fiction on Savage Hunger
"A sizzling page turner. Terry Spear is wickedly talented."—Night Owl Reviews Top Pick, 5 Stars on
Savage Hunger
"Intense and swoon-inducing...The chemistry is steamy and hot."—USA Today Happy Ever After on Dreaming of the Wolf
CONTEST INFO: Prize 1: A print book from Terry’s backlistPrize 2: An Electronic book from Terry’s backlist
a Rafflecopter giveaway

Posted by Lisa Richards/alterlisa at 2:50 PM

Hi Leanne -
Do you make up a 'book bible' for each story/series (aka 'style guide') so you can refer back to in keeping all of the character descriptions and traits consistent? Assuming you do, do you do this by hand or keep it on the computer? If you use the computer, do you have an app or program for that or just make your own?

Who wouldn't answer 'yes' to the question or opinion or having a shy male strip in front of woman to shift? Why? Major turn-on, plus sharing and intimacy.

If one of the main characters in a book is an immortal creature, or lives a very long life-span, and the other main character is a human, then of course I'd want the human to be 'turned' so they can spend their lifetimes together. (It's rare that the reverse happens - where the one with the super long life-span is reduced to a human life-span.)

Every book doesn't have to have a human and a character of another species (shifter, vampire, etc.) - both main characters can be paranormal creatures to begin with.