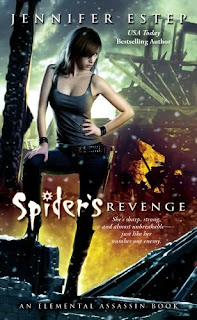 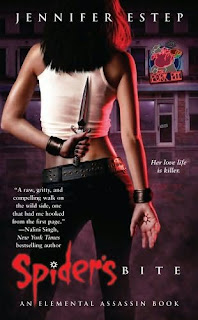 If you are one of the few who haven't read this amazing series and want to see what all the excitement is about, check out this link by Simon and Schuster here and read the first seven chapters in the first book  in the amazing series "Elemental Assassin".  Quickly you will realize why we're champing at the bit and counting the hours till Sept 27th and the release of "Spider's Revenge".


My name is Gin, and I kill people.
"They call me the Spider. I'm the most feared assassin in the South -- when I'm not busy at the Pork Pit cooking up the best barbecue in Ashland. As a Stone elemental, I can hear everything from the whispers of the gravel beneath my feet to the vibrations of the soaring Appalachian Mountains above me. My Ice magic also comes in handy for making the occasional knife. But I don't use my powers on the job unless I absolutely have to. Call it professional pride.

Now that a ruthless Air elemental has double-crossed me and killed my handler, I'm out for revenge. And I'll exterminate anyone who gets in my way -- good or bad. I may look hot, but I'm still one of the bad guys. Which is why I'm in trouble, since irresistibly rugged Detective Donovan Caine has agreed to help me. The last thing this coldhearted killer needs when I'm battling a magic more powerful than my own is a sexy distraction...especially when Donovan wants me dead just as much as the enemy."

I've been hearing good things about this series so I jumped with B&N had the 1st book for $1.99 for the Nook.

I've been hearing good things about this series so I jumped on the 1st book when I was it was only $1.99 for the Nook.

Wow, thanks for pointing me in that direction!! It sounds amazing and am now anxious to go buy the first book!!