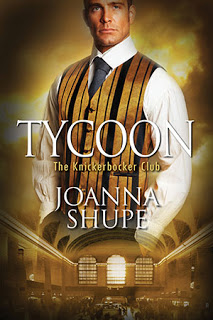 Sometimes the journey is more pleasurable than the destination . . .In Gilded Age New York City, the bachelors of the Knickerbocker Club spend their days rubbing elbows with Manhattan's most elite citizens--and their nights with its most intoxicating women . . . Standing on the platform at Grand Central Station, Ted Harper is surprised by a fiery kiss from an undeniably gorgeous damsel in distress. He's certain she's a swindler who's only after his money, but he's never met a woman so passionate and sure of herself. Disarmed, he invites her to spend the journey to St. Louis in his private car--perhaps against his better judgment . . .
Clara Dawson has long known how to take care of herself, but the savvy shop girl is at a loss when she witnesses--and becomes entangled in--a terrible crime. Desperation propels her into a stranger's arms at the train station, but she hadn't expected Ted to offer her the protection she so badly needs--nor did she expect their chemistry to develop more steam than the engine of the train. He's everything she never thought she could have, and she's everything he didn't know he wanted. But as her secrets begin to unfurl, their fledgling romance could be in danger of derailing before they arrive at the next station . . .

First of all (and I'm not usually one that drools over a book cover, butttt) this cover model reminds me so much of two of my fav
Western actors, James Garner as Maverick, but with Robert Mitchum's cleft chin (with what "we" now apparently are calling "butt chins" -seriously! why not just call them "Kardashian chins"). A total waste of an awesome cover model on an ebook cause he was so hot! You see the cover one time! One time! Well maybe two- once when you purchase it and once when you start the book. One of the reasons, I still fav the printed word over the e-book.  Sorry, to get back to the job at hand--the book-the book!
This was a book and a series that I really wanted to love. Not that it was bad just not as great as I was expecting. I went into the book expecting more historical history than I got. This is my favorite time in history and I was really looking forward to "seeing" the fascinating scenes of Old New York. If I could go back in time to visit (not live mind you as I do love my creature comforts) the era from the 1890's to the 1920's in New York would be it.  My disappointment is my  fault as I had googled "The Gilded Age" and checked out Shupe's Pinterest site where she has some awesome dresses from this time (I probably spent near an hour looking at the outfits from this era and pictures from old New York before reading this book). And this was a novella so length may have precluded these marvelous details from being added.
I'm willing to give Shupe a pass and I already have pre-ordered Magnate based on the characters, Ted and Clara. I loved the thoroughly modern Clara who works for a living (OMG!) and is pretty independent and definitely a talker. Even though originally Ted suspected that Clara was a con-artist, I loved how protective he was to her. I wish she had told Ted earlier why she was being chased as  I think her hiding this was not beneficial to the story but just a plotline. Ted could just as well have helped and protected her without this lie between them. I would have loved seeing them work together to sort out the mystery. I know that there "must" be conflict and they "must" overcome it to have a HEA plotline but I'm kinda burned out on that boring predictability.