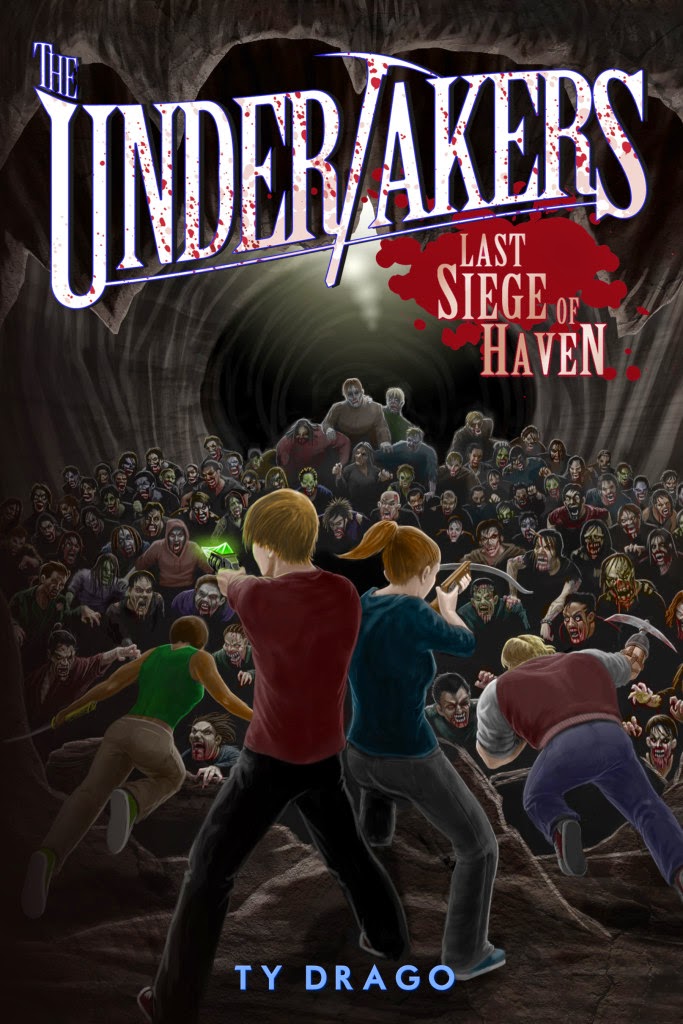 While away on an undercover mission, Undertaker Will Ritter has made an unthinkable alliance…with a Corpse! But though Robert Dillin (aka ‘The Zombie Prince’) is indeed one of those alien invaders who animate and possess the bodies of the dead — unlike the rest of his kind, Dillin isn’t evil. In fact, he wants to help. And Will needs that help, because the Queen of the Dead has learned the location of Haven, the Undertakers’ secret HQ, and is planning a massive and deadly assault.
With the last day of the Corpse War finally upon them, Will and his friends find themselves in a desperate race to close the Rift between worlds and forever kill the Corpses. But can they do before Haven is overrun?
For that matter, can they do it at all?


When you start writing, do you already have an ending in mind, or do you just let the narrative go where it takes you?

Well, the fact is that I when I sit down to write I usually have at least a broad-strokes idea of where I want the story to go.  I don’t make outlines, except when called upon to do so by my agent or a publisher (and, even then, I usually don’t stick to them!).  I’m a big believer is letting the story take me where it will, and I’m often surprised.

Do you already have a set number of books that you plan to write in the series?

After the first Undertakers books was published, I had lunch with my then publisher to discuss the future of the series.  I originally had in mind seven books.  She had three.  We met in the middle a five.  Honestly, that’s how it went down!  But since there, I’ve been writing every novel with an eye toward a five-book story arc.

What did you enjoy most about writing this book?

I love all aspects of writing, but I’d have to say my favorite is that moment when I type the last lines of a novel’s first draft.  It’s still only the beginning, since 80% of what I do is editing my own work.  But it’s still SO amazing to know that the story, which up until now has existed only in between my ears, is now written done and real!

Who are some of your favorite authors that you feel were influential in your work?  What impact have they had on your writing?

My favorite authors are Lee Child, Jackie Kessler, A.S. King, and Heather Brewer, not necessarily in that order.  I also enjoy David Baldacci and Terry Prachett more than a little bit.  As for who had the most influence on my work: I don’t know.  Part of being a writer is finding your own voice, and while I’ve certainly been inspired by these other authors, I’ve done my level best to make sure that the tone and voice of my writing is entirely my own.

What are some day jobs that you have held?  Did any of them impact your writing?

Oh, gosh.  I’ve been a computer programmer, a project manager, and – most recently – a business analyst.  I still do some business consulting on the side, writing business plans and requirements documents for companies.  But my first love is, and always has been, fiction writing.

What’s next for you?

With the Undertakers series “in the bag,” as the say, I’ve been working VERY hard on a new YA concept that I’ve called “Torq.”  I won’t give anything away.  Let’s just say I’ve putting my own spin on the superhero origin story.

• Twitter or Facebook? Facebook!
• Favorite Superhero?  Tough one.  D.C.: Batman.  Marvel: The Hulk
• Favorite TV show? Doctor Who (I’m a nerd; sue me)
• Sweet or Salty? Both
• Coke or Pepsi? Pepsi
• Any Phobias? Stinging insects.  I’m an expert on them because I believe in knowing your enemy!
• What are you reading right now or what’s on your TBR? “The Warlock” by Michael Scott.  It’s the fifth book in his “Secrets of the Immortal Nicholas Flammel” series.  After that, I expect to dive into the sixth and final book.
• 2015 Movie you’re most looking forward to?  “Batman v. Superman!”  I really liked “Man of Steel” and can’t wait to see how Ben Afleck handles the dark knight!

Ty Drago does his writing just across the river from Philadelphia, where the Undertakers novels take place. In addition to The Undertakers: Rise of the Corpses,The Undertakers: Queen of the Dead, and The Undertakers: Secret of the Corpse Eater, he is the author of The Franklin Affair and Phobos, as well as short stories and articles that have appeared in numerous publications, including Writer’s Digest. He currently lives in southern New Jersey with his wife and best friend, the real Helene Drago née Boettcher.

Do you drink Coca-Cola or Pepsi?
ANSWER THE POLL and you could win a prepaid VISA gift card!