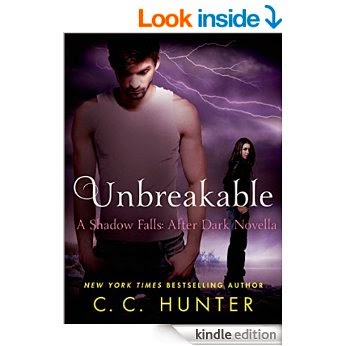 He isn’t everything he says he is.  He’s even more…
Who is Chase Tallman, the newest member of Shadow Falls? What made him into the sexy, mysterious vampire he is today? And what led him to Della Tsang? Step back in time and unearth the secrets that haunt him.  The secret of how he became a vampire—and how he knows so much about being reborn.  Secrets about his first love, his family--and what steers him toward Della, the beautiful, complicated girl he just can’t seem to stay away from. The one who makes him want things he thought he’d given up on long ago. It all began with a research study, a palm reader, and a plane crash that sent him on a quest…for a love that’s unbreakable.
Shadow Falls
0.5. Turned at Dark (2011)
1. Born At Midnight (2011)
2. Awake at Dawn (2011)
3. Taken at Dusk (2012)
4. Whispers at Moonrise (2012)
4.5. Saved at Sunrise (2013)

This is the first book I've read in this series but it was definitely good enough that I intend to go back and read the rest of the series. The only regret I had was that just as I got into it, it was over.
Posted by Lisa Richards/alterlisa at 12:59 AM

Unbreakable is the only Novella that I have not yet read in the Shadow Falls series. I loved the books about Kylie and the books (so far) about Della, but this Chase has me puzzled. At first I thought he was just an evil panty perv. Now I have no idea what to think of him!

I am on the wait list for Unspoken also, and am ever-so-excited that C.C. has finally released the cover for Miranda's first book! Great series :)